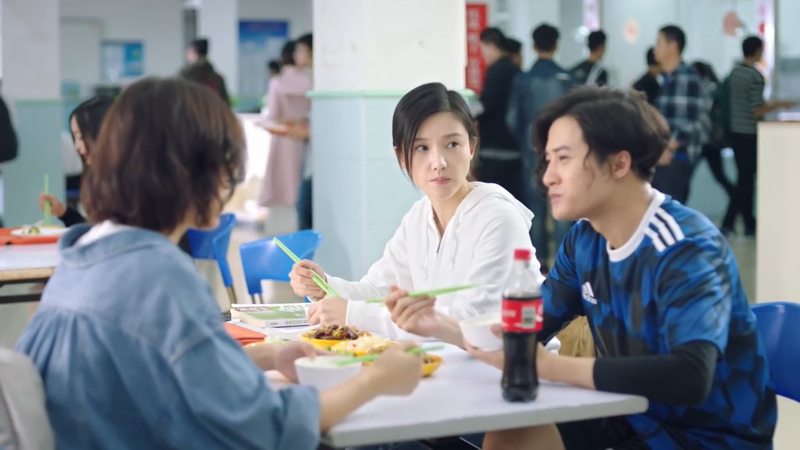 Su Yunjin talks to Mo Yuhua about her bad experience working as a product advertiser. The conversation turns to their high school classmates. Zhou Ziyi tells Su Yunjin not to worry. Not naming anyone in particular, he says some people might go far away but will come back in the end.

Cheng Zheng’s roommates tease Cheng Zheng for being a heartbreaker. The latest victim is a fellow student who borrows his architecture books even though her major is Chinese literature.

Su Yunjin’s roommates use too much electricity and cause a blackout in the dorm. As dorm leader, Shen Ju’an demands to know who did it. Su Yunjin takes the blame and says she was cooking ramen. He confiscates her pot, but it’s not hot, which means she’s not the culprit. Nevertheless, he doesn’t call her out on her lie.

Adhering to the rules, Shen Ju’an can’t return the pot. In return, he gives Su Yunjin tips on where she can buy cheap food. More importantly, he helps her find a better part-time job.

Shen Ju’an takes Su Yunjin to the school’s library where he works as an assistant. This is his senior year, so he doesn’t have a lot of time. If she wants, she can take over for him.

Su Yunjin resigns from her job as a product advertiser and begins working in the library. Shen Ju’an trains her and tells her not to worry. He comes to the library often to study. If she has questions, she can always ask him.

Shen Ju’an goes to the library regularly and brings Su Yunjin snacks if he can. One time, her hair tie breaks. He says she looks prettier with her hair down.

Su Yunjin says there’s nothing going on between her and Shen Ju’an, but Mo Yuhua doesn’t believe it. If Shen Ju’an isn’t interested in Su Yunjin, why would he help her so much?

After the library closes, Su Yunjin still has to stay to shelve books. Shen Ju’an appears and helps her. As they work, they share stories about the professors they’ve had.

In class, Su Yunjin hears other students gossip about her and Shen Ju’an. They can’t believe someone talented like him, the president of the Student Council, would date a nobody like her.

Looking around the school cafeteria, Chen Xiaoyu searches until she finds Cheng Zheng so she can eat with him. While they talk, he receives a call from Zhou Ziyi, who’s eager to provide an update on Su Yunjin. Cheng Zheng hangs up as soon as he hears Su Yunjin’s name. Zhou Ziyi continues to call, so Cheng Zheng turns off his phone.

Zhou Ziyi organizes a gathering of old classmates. Mo Yuhua wants to go and convinces Su Yunjin to come along.

At the gathering, Zhou Ziyi praises Su Yunjin for changing from an ugly duckling into a swan. Cheng Zheng keeps on grilling food and doesn’t say anything. Su Yunjin greets Cheng Zheng, but he walks away. Still mad at her, he won’t let her eat the food he grilled.

Zhou Ziyi attempts to play peacemaker. Su Yunjin looks at Cheng Zheng but doesn’t know what to say, so she leaves. Cheng Zheng is angry by her attitude, not understanding why she is friendly with everyone except him.