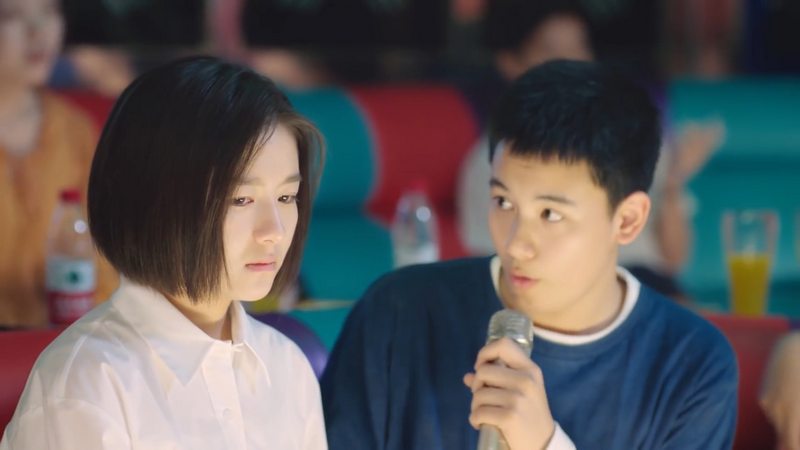 [The end of high school…] At the class party, Cheng Zheng wants to sing karaoke with Su Yunjin, but Meng Xue insists on singing with him. He couldn’t say no because Meng Xue has to go abroad for college. Nevertheless, he refuses to let go of Su Yunjin’s hand. After trying repeatedly, Su Yunjin pulls her hand free so she can go search for Mo Yuhua.

Mo Yuhua is inconsolable. She told Zhou Ziyi that she likes him, but he turned her down. Not wanting to ruin the party, Mo Yuhua goes home to deal with her emotions.

After the party, Zhou Ziyi gathers everyone outside for a picture. Su Yunjin purposely stands far away from Cheng Zheng. After the picture is taken, it begins to rain. Su Yunjin walks home and Cheng Zheng follows her.

Su Yunjin stops in front of the bookstore where she worked part-time. Following her lead, Cheng Zheng stops a few steps behind her. Once again, he reminds her to choose a college in Beijing. She hugs him and promises to do that to repay him for tutoring her.

But once she gets away, Su Yunjin cries. She has to stay in Shanghai to take care of her mother. Unlike her, Cheng Zheng has endless options. She’s sure once he begins a new life in college, he’ll forget her.

The summer ends. Su Yunjin says goodbye to her mother and heads to college. Far away in Beijing, Cheng Zheng has moved into his dorm. He cuts out images of himself and Su Yunjin from the class picture taken after the karaoke party. Then he glues their images together onto another picture.

At college, Su Yunjin runs into Zhou Ziyi. She thought he had gone abroad to study, but he says that’s not possible with his bad English. Already familiar with the campus, he shows her where her dorm is and helps take her luggage up to her room.

Su Yunjin’s roommates suspect Zhou Ziyi is Su Yunjin’s boyfriend because of his attentiveness towards her. Unpacking her things, Su Yunjin finds money in the food box her mother gave her.

Zhou Ziyi buys cleaning items for Su Yunjin. She won’t accept them, so he leaves everything on the steps of her dorm and runs away.

After asking Su Yunjin for her phone number, Zhou Ziyi texts it to Cheng Zheng. Cheng Zheng calls but doesn’t say anything. Hearing her voice answering the phone confirms that she lied about going to college in Beijing.

Cheng Zheng goes on a run to vent out his frustration.

A fellow student convinces Su Yunjin to work as a product advertiser. The hours are flexible, and she would be paid by commission based on the number of people she can register.

The job involves passing out flyers and speaking to strangers, which is difficult for Su Yunjin. She forces herself and gradually becomes good at it. Unfortunately, Su Yunjin’s partner is sneaky and offers to help in registering clients. At the end of the day, the registration sheets show that the partner registered all the clients.

Zhang Yue scolds Cheng Zheng for going to college far from home. Her dream is to open a bar and live a life of leisure. However, she is stuck working in the family’s company. She will do it for three more years. Then he has to take over whether he wants to or not. He’s saved from further scolding by the appearance of Chen Xiaoyu, a fellow student.

Chen Xiaoyu praises Zhang Yue’s beauty and demeanor. Cheng Zheng doesn’t agree because he grew up with Zhang Yue and used to seeing her. Since Chen Xiaoyu is in the drama club, she invites him to join the club’s activities. He declines with the excuse of not knowing what they do.

After being cheated by her partner, Su Yunjin makes sure to register her clients herself. Suddenly, there’s a heavy downpour. Her partner runs off, leaving her to pack up everything. Shen Ju’an happens to walk by. He shares his umbrella with her and accompanies her back to her dorm.