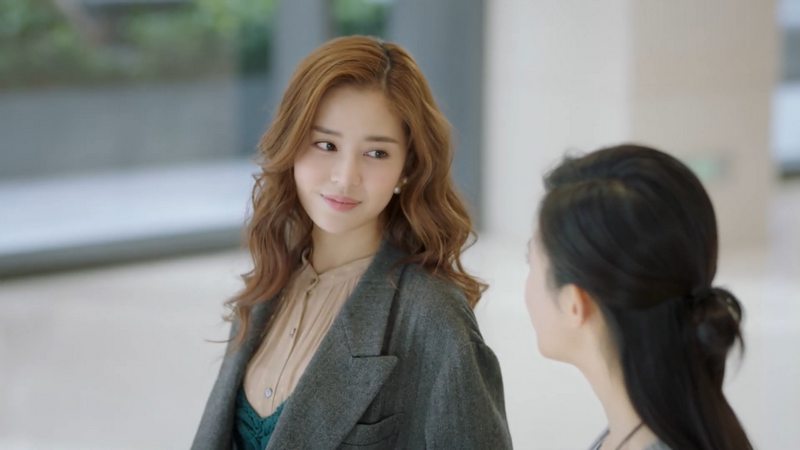 When the meeting between CEO Xu and Meng Xue ends, Su Yunjin arranges for a car to pick up Meng Xue. Meng Xue congratulates Su Yunjin. From high school until now, through the ups and downs, Meng Xue never thought Cheng Zheng and Su Yunjin would end up together.

Su Yunjin’s phone rings. It’s Cheng Zheng, and he is outside her company, waiting for her to get off work.

Cheng Zheng drives with one hand and uses his other hand to hold Su Yunjin’s hand. Worried for their safety, Su Yunjin forces him to drive with both hands. She doesn’t know where they are going. She doesn’t want to go to an expensive restaurant, so he teases her by promising to only take her to street food stalls.

Cheng Zheng and Su Yunjin arrive at his place. She looks at him with suspicion. He says he cooked for her, but she doesn’t believe him.

Cheng Zheng doesn’t leave immediately. Instead, he stands outside and looks at his house in happiness. He gets a call from Zhou Ziyi, who says he wants to die.

Su Yunjin plans to take time off from work to take her mother to the wellness center. Since Cheng Zheng won’t be busy, he convinces her to let him do it. Earlier in the day, he had gone to a temple and put their names in a lock. Now he gives her the key. She says what he did is nonsense, but she accepts the key with a smile.

As soon as Su Yunjin arrives at work, CEO Xu tells her to go to the airport to pick up Meng Xue’s boss, Chuck. Then she needs to take Chuck to a hotel. She worries because she has never done this. More importantly, she doesn’t even know what Chuck looks like.

Meanwhile, Cheng Zheng, Su Yunjin’s mother and Uncle Ding are at a wellness center. Uncle Ding is surprised to learn that Cheng Zheng arranged for him to get a check-up also. Uncle Ding worries about the cost, so Cheng Zheng says he got a discount by paying for two slots instead of one.

Su Yunjin hurries to the airport. Chuck’s plane already landed, so she runs around trying to find him. When she finally sees him, Chuck is irate because he has had to wait for her.

Cheng Zheng gets a call from his boss. A company is interested in Cheng Zheng’s design, so Cheng Zheng and his boss need to go discuss the deal. Cheng Zheng says he is busy, but his boss says the deal can be settled quickly. Cheng Zheng tells a nurse to let Su Yunjin’s mother and Uncle Ding know to wait for him if he isn’t back in time.

Su Yunjin takes Chuck to a hotel. She is ready to talk about the project, but Chuck doesn’t say anything. Meng Xue is already at the hotel and greets him, but he is still in a bad mood. He tells Su Yunjin and Meng Xue to leave him alone so he can rest.

Meng Xue’s boss is an important person in the Internet industry in the US. Meng Xue thought CEO Xu would meet with her boss to discuss the project. She doesn’t understand why CEO Xu sent Su Yunjin.

While waiting for Chuck, Su Yunjin gets a call from Uncle Ding, who says her mother has fainted. Su Yunjin calls CEO Xu to let him know about her mother’s situation and asks for time off. CEO Xu tells her to take care of her family matter first.

Arriving at the wellness center, Su Yunjin is relieved to see her mother doing fine. The doctor says her mother fainted due to hunger. He encourages them to take advantage of the free meal that’s included in the check-up package.

Su Yunjin talks to Uncle Ding in private. She asks if there is something wrong with her mother. Uncle Ding says her mother really fainted from hunger, and they aren’t hiding anything from her. He was careless and forgot to remind her mother to eat. Su Yunjin looks around but doesn’t see Cheng Zheng.