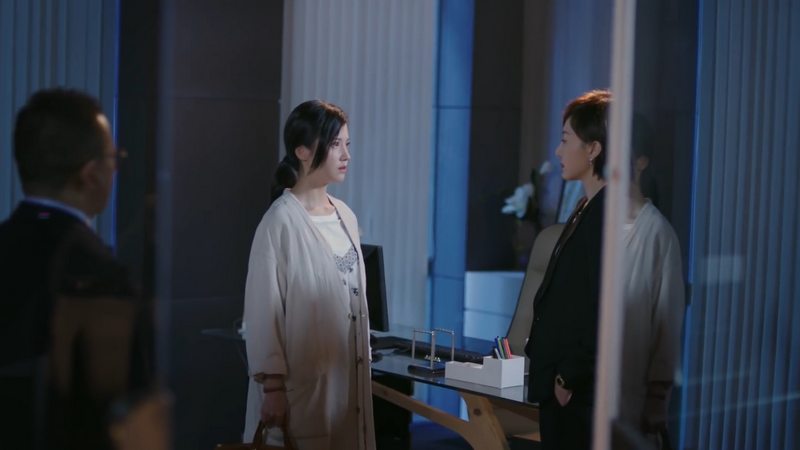 Sister Guo decides to resign. She is pregnant and has been thinking about leaving the company. CEO Xu probably guesses her intention, so she is glad he pushed her to make up her mind. She encourages Brother Li and Su Yunjin to follow CEO Xu. Also, she hopes Su Yunjin can persuade CEO Xu not to cut their project.

Su Yunjin gets off work late, but Cheng Zheng is still waiting outside the company. He notices she seems sad.

Su Yunjin tells Cheng Zheng about Sister Guo’s resignation. To cheer her up, Cheng Zheng spouts philosophical nonsense. He is disappointed because their first date, which he planned carefully, didn’t happen. He requires her to make it up to him by eating dinner or breakfast with him every day next week.

Su Yunjin gets a call from Uncle Ding. Uncle Ding says he wanted her mother to get a check-up at a wellness center in Shanghai, but her mother refused to go. Finally, Uncle Ding convinced her mother by pointing out that they could visit Su Yunjin while in the city.

Su Yunjin goes to CEO Xu’s office to speak about the project in her department. After listening to her, CEO Xu assigns her to another project. As her boss, he doesn’t need to explain his decisions to her. Nevertheless, he wants her to understand that the information in her new project will help her with her current project.

While talking to Cheng Zheng on the phone, Su Yunjin reviews the information in her new project. She sees Meng Xue, who has a meeting with CEO Xu. CEO Xu tells Meng Xue that Su Yunjin will handle the project between their companies.