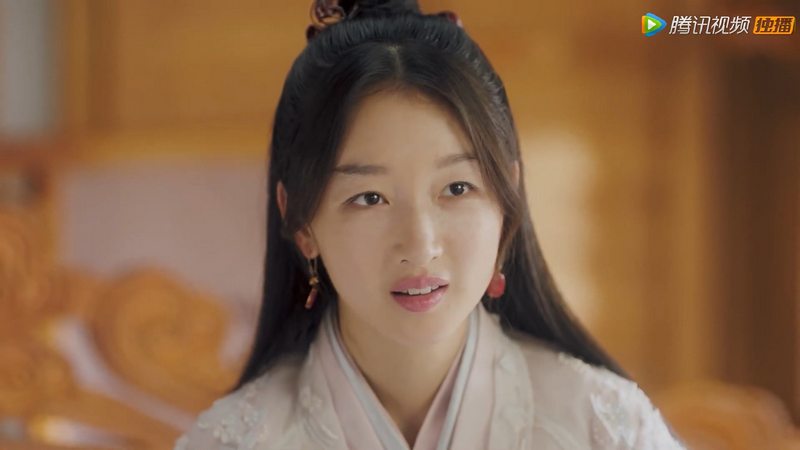 Shanggu realizes that Baijue is nice.

Fengyun says only the Phoenix Queen or Water Bead can heal Shanggu. Wuhuan, seeing an opportunity to improve her life, brings water from the Icy Pool to ease Shanggu’s pain. Baijue allows Wuhuan to take care of Shanggu.

Xueying agrees to let Baijue borrow the Water Bead on one condition; she wants to be his disciple.

Fengyun transfers his power to Shanggu to no avail.

With his eyes covered, Baijue lowers Shanggu’s shirt and uses the Water Bead to heal her.

Wuhuan tells Shanggu that Baijue sentenced Wuxi to death. Blaming herself, Shanggu is upset at Baijue for not keeping his promise to Fengyan and spare Wuxi’s life.

Shanggu finds out Baijue only destroyed Wuxi’s cultivation. Showing Shanggu two spirits, Baijue lets her decide whether to give Fengyan’s spirit or a fake one to the Phoenix Clan.

Shanggu gives the fake spirit to Fengyun and chooses Wuhuan, a phoenix of low status, to be her divine beast, setting an example for everyone to be judged on qualifications and work ethic, not birth status. Unbeknownst to the Phoenix Clan, Wuxi’s body is a tree while Fengyan’s spirit is in a flower, so they can meet again.

Shanggu encourages Wuhuan to train hard like her so that no one can look down on them. Hongri notifies Shanggu, unable to stop Xueying from entering Changyuan Hall.

Xueying has an Instruction Feather from Baijue to prove she is his disciple. Shanggu uses the Ancestral Sword to force Xueying to leave Changyuan Hall. Because of the Water Bead, Baijue tells Shanggu to get along with Xueying.

Anything associated with Xueying upsets Shanggu, even white dresses sent by Zhiyang for the Day of the Chosen.

Shanggu gives all her books to Xueying and tells her to study on her own. Xueying already read them, and picking up a book about geography, she notices it looks new even though Shanggu claims to have read everything.

Asked about the book of geography, Xueying answers easily. On the other hand, Shanggu cheats by relying on Yuemi and Wuhuan to help her. Baijue asks about the cultivation of Tiger Demons, giving Shanggu a chance to show off. Hongri makes tea for Shanggu and ignores Xueying.

At the Temple of Love, Baijue sees Shanggu throwing away Xueying’s red thread of fate tied to his name tag and replacing it with her own.

On the Day of the Chosen, immortals with the highest cultivation enter the God Realm, so Zhiyang plans for Shanggu to choose one of them to be her disciple. Baijue thinks it’ll take Shanggu 10,000 years to become Chief God of Chaos, but this isn’t fast enough because the Power of Chaos is dissipating.

Baijue checks the God-holding Platform, and surprisingly, the seal is intact even though the barrier of the Nether World continues to weaken.