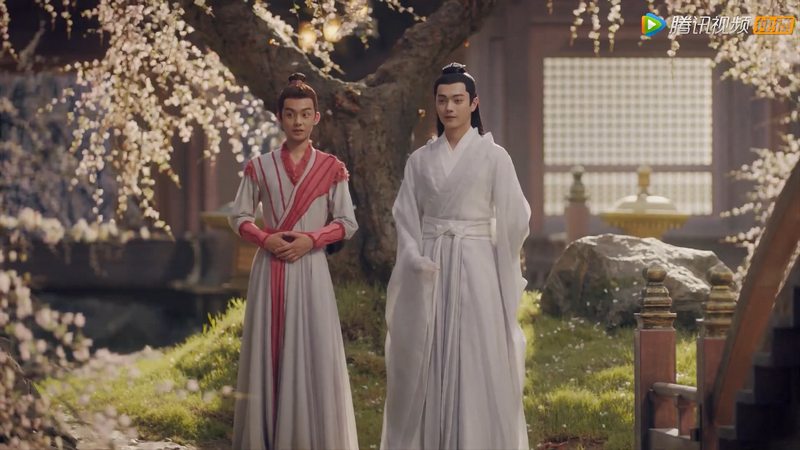 Baijue thinks Shanggu is losing weight. Hongri points out Shanggu’s waist, which keeps expanding because she is eating more than ever.

Ridiculing Shanggu’s temperament and behavior, Xueying says Baijue tolerates Shanggu out of necessity. Shanggu challenges Xueying to a fight, and if she wins, she expects an apology for damaging her kite.

Baijue watches the fight between Shanggu and Xueying. Xueying cheats by freezing Shanggu. Frustrated, Shanggu resorts to using the Ancestral Sword to gain an advantage.

[Flashback: Xueying says the fight won’t be fair if Shanggu uses the Ancestral Sword. Confident in her ability, Shanggu promises not to use it.]

Baijue denounces Xueying for cheating and scolds Shanggu for falling for Xueying’s provocation. Hurt by Baijue’s criticism, Shanggu says the kite doesn’t mean anything to him, but it’s important to her.

Xueying offers to apologize to Shanggu. Not fooled by Xueying’s pretense, Baijue takes 1,000 years of cultivation from her.

Under Xueying’s name, a gift of 1,000 years of cultivation is sent to Shanggu as an apology.

Tianqi mocks Baijue because Shanggu has stopped training. Zhiyang tells Shanggu that Baijue punished Xueying. No longer mad, Shanggu will wait until Baijue has time so that they can go choose her divine beast together.

Baijue won’t go with Shanggu, telling her to learn to do things by herself.

The Phoenix Queen can go through nirvana three times. After each time, she will be reborn as another person but with greater cultivation. Preparing to become Shanggu’s divine beast, Fengyan decides to go through nirvana even though she is in love with a childhood friend, Wuxi. Wuxi couldn’t bear to lose Fengyan, so he steals her spirit to stop her nirvana.

Since Wuxi has concealed his scent, Fengyun, an elder in the Phoenix Clan, asks Baijue for help.

Shanggu decides to search the inn.

Following the Immortal-seeking Bell until it stops in front of a room, Shanggu persuades Fengyan to talk to her by claiming to know a lot of news, including a secret from the Phoenix Clan.

Fengyan finds out Baijue is investigating her disappearance.

Fengyan doesn’t aspire to be Shanggu’s divine beast, especially when other phoenixes can replace her, and just wants to grow old with the man she loves. Shanggu lets Fengyan go.

Baijue returns to the inn.

Seeing empty bottles of wine, Baijue scolds Shanggu for letting Fengyan escape. Shanggu asks if Baijue will punish her if she breaks rules, and with the courage of a drunk, she kisses him.

When Shanggu wakes up, she can’t remember if she dared to kiss Baijue.