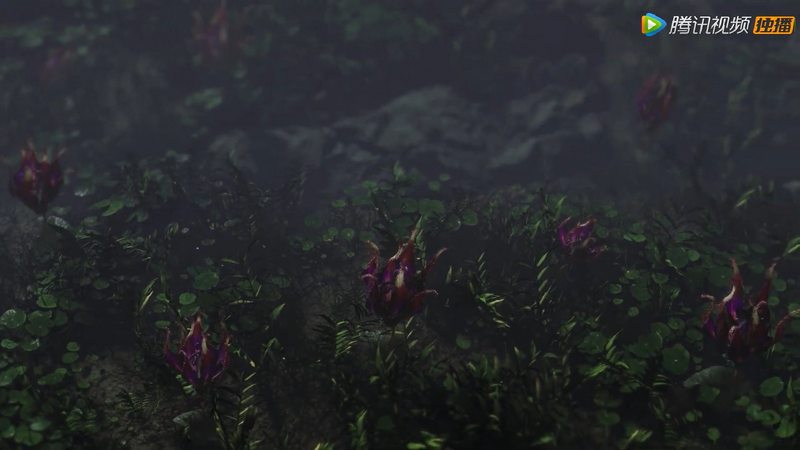 Baijue sees plenty of Deicide Flowers at the God-holding Platform. Xuanyi says Deicide Flowers release an aura of chaos when they bloom, which can be absorbed by the Chief God to accelerate cultivation.

Knowing the destruction of the Tribulation of Chaos, Baijue decides to push Shanggu to become Chief God of Chaos as soon as possible.

Hearing a rumor about Baijue wanting to invite her for a meal, Shanggu wonders if her red thread of fate is working already. Wuhuan teases Shanggu not to lose her composure if Baijue confesses his feelings. Hongri tells Shanggu that Baijue wants to see her.

Shanggu dresses up, anticipating her meeting with Baijue.

Baijue tells Shanggu to go to the Nether World by herself to train for 1,000 years. Shocked, Shanggu begs Baijue to reconsider.

Shanggu cries, but Yuemi doesn’t know how to help her.

On the Day of the Chosen, Zhiyang and Baijue prefer for Shanggu to choose Muguang, a golden dragon who ranks first, to be her disciple. However, Shanggu chooses Gujun because his attitude reminds her of “someone.” Xueying ridicules Gujun for being a demon. In one month, Xueying and Gujun will fight, and if he loses, Shanggu agrees to train in the Nether World until she obtains the Power of Chaos.

Wuhuan tells Shanggu that Gujun is in trouble, accused of injuring Tianqi.

Shanggu teases Tianqi, knowing that a Nine-Clawed Lotus can’t injure him. Tianqi worries about Shanggu, so he tells her not to go to the Nether World.

Zhongli and Xiahui accuse Gujun of using a Nine-Clawed Lotus to injure Tianqi. However, Gujun has never heard of Nine-Clawed Lotuses, which grow in Baijue’s pond. Tianqi tells Shanggu that Gujun must become a god to have a chance of defeating Xueying.

Baijue finds out a Nine-Clawed Lotus is missing from his pond. Xueying is in charge of the pond, so Hongri suspects her.

Wuhuan lets Baijue know where Shanggu is at, causing Yuemi to glare at her.

Zhiyang is tired of Tianqi pretending to be injured. Tianqi begs Shanggu to help him eat. Interrupting them, Baijue stops Shanggu before she can feed Tianqi food.