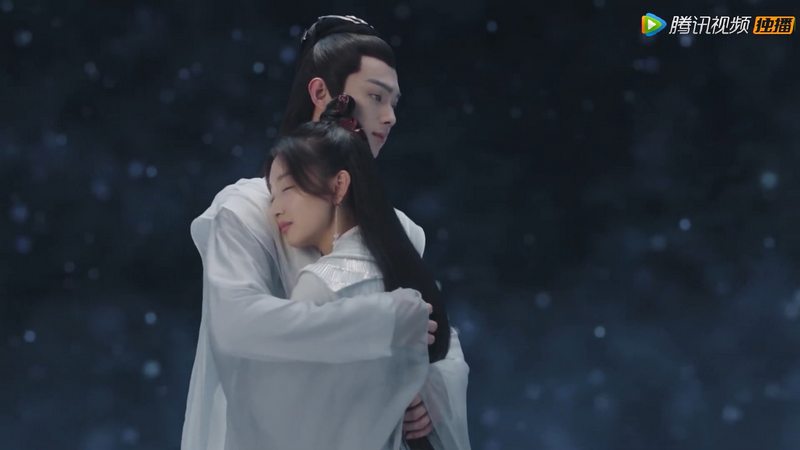 Shocked to see Baijue instead of Tianqi, Puhua says Tianqi arranged to have a date with Shanggu in the cave. Baijue forbids Puhua from matchmaking for True Gods, especially Shanggu.

Baijue carries Shanggu while she is sleeping back to her place, Pilgrimage Hall, causing a flurry of rumors about her identity.

Shanggu is distressed, not knowing if she did something embarrassing when Baijue saw her sleeping and if she needs to deal with attacks from his fans.

Gods and goddesses bet which type will win Baijue’s heart, predicting it’ll likely be someone who is lovely, a contrast to his personality.

Shanggu asks Puhua about love. Puhua tells Shanggu to listen to her heart and warns her to be careful. Love is like wine, refreshing in the beginning but can become troublesome later.

Touching Baijue’s face, Shanggu wonders if he appears cold because it’s his nature or because he doesn’t know how to show emotions. Baijue lets Shanggu take credit for defeating Xuanyi so that she will stop pretending to be weak.

Shanggu wants to look at the stars, so Baijue takes her to the Heaven and Earth Platform. The Heaven and Earth Platform contains warnings from Ancestral God. Every 180,000 years, the Tribulation of Chaos occurs, and only the Chief God of Chaos can save the realms. After Xuanyi rebelled, the responsibility falls to Shanggu. Baijue receives a warning about the Tribulation of Chaos.

Baijue asks Zhiyang to issue an edict, forbidding anyone from going near the Heaven and Earth Platform. Zhiyang can’t depend on Tianqi, so he is glad to have Baijue’s help.

Shanggu won’t reveal who she is in love with. Since Shanggu only listens to Baijue, Yuemi tells her to kiss him or find a way to attract his attention.

To attract Baijue’s attention, Shanggu shares her toys with him to cheer him up. Baijue helps Shanggu fly a kite.

According to Ancestral God’s order, Shanggu’s divine beast must come from the Phoenix Clan. Baijue chooses Phoenix Queen Fengyan to ensure the clan’s loyalty to Shanggu.

Baijue and Hongri see Shanggu working on her posture.