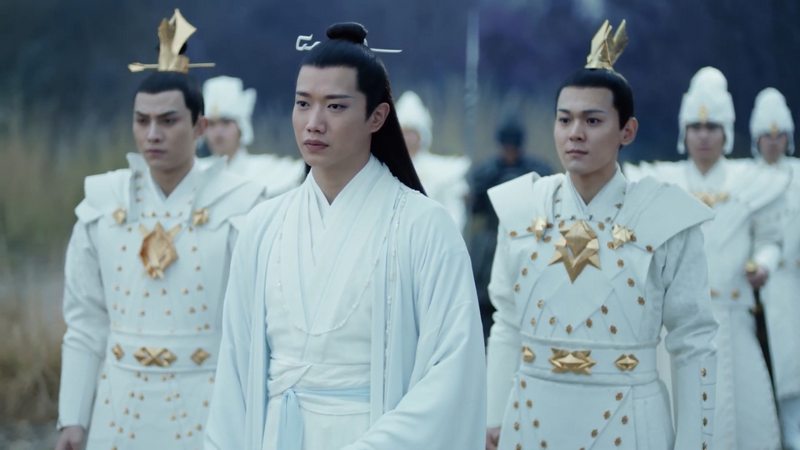 A’Mo searches for fish and shellfish at the seashore, cooking whatever she can find.

A’Mo doesn’t want Jing Xiu to know she cut her hand digging for clams. Jing Xiu tells A’Mo he doesn’t have any family or friends.

A’Mo looks at the peach tree in full bloom in the front yard. Soon, there will be peaches to eat.

Jing Xiu tells A’Mo to sell his ring and use the money to buy food. A’Mo doesn’t want him to think he is a burden. She also doesn’t have anyone, so they can help each other by staying together. Jing Xiu discovers A’Mo’s hand is injured.

Jing Xiu bandages A’Mo’s hand. A’Mo says she can be his eyes, and he can be her ears. Jing Xiu agrees to stay, smiling for the first time since knowing her.

Jiu Chen thinks it’s strange Ling Yue hasn’t gone after him for revenge. After all, this is someone who overthrew her father to take over the Mountain Spirit Realm. Yun Feng says he will keep an eye on Ling Yue. Si Ming has urgent news for Jiu Chen and Yun Feng.

The peach tree has too many peaches. A’Mo can’t eat them all.

A’Mo gives Physician Sun a bag of peaches. Physician Sun says she can use peaches to make wine. Years ago, he damaged his tongue testing medicine, and after that, he couldn’t taste anything. He eats a peach, and surprisingly, he can taste it.

A’Mo asks Jing Xiu to carry baskets of peaches into the kitchen so she can make wine. They can make money by selling wine.

A’Mo washes the peaches, and then she puts them into containers. In half a month, this will become wine. Belatedly, A’Mo realizes she hasn’t saved any peaches to eat. Jing Xiu says the peach tree will have more fruit in a few days.

A’Mo looks for a job, but no one wants to hire her.

Cheng Yan is whipped 30 times, his punishment in the Heaven Realm for injuring Yuan Tong. Qing Yao thanks Jiu Chen and Yun Feng for saving her brother. Qing Yao has to take care of Cheng Yan, so it’s up to Jiu Chen to protect Ling Xi.

A’Mo eats quickly so she can go look for a job. Jing Xiu tells her to be careful.

Si Ming tells Jiu Chen that Thunder Lord is forcing his way into Suoyao Tower. As a result, Si Ming had to ask Shi San to try to stop Thunder Lord until Jiu Chen can get there.

Actually, the Heavenly Emperor didn’t want to kill Ling Xi, so he told Jiu Chen that the Shennong Cauldron could save her. However, Jiu Chen must bear all responsibilities if something goes wrong.