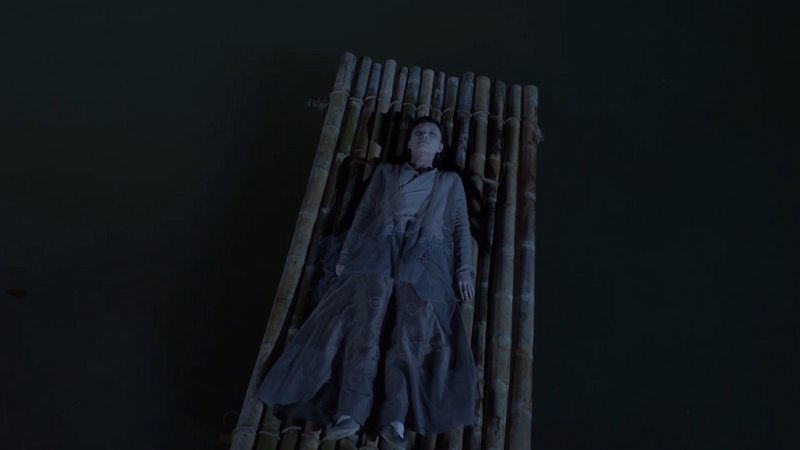 Lin Shaohai puts A’Mo on a raft, cuts the binding ropes and pushes the raft into the lake. The raft breaks apart. Lin Shaohai couldn’t look as A’Mo sinks into the water.

Si Ming persuades Jiu Chen not to intervene. Otherwise, everything Jiu Chen has done would be in vain.

The demonic mark behind A’Mo’s ear glows, and A’Mo regains consciousness. She struggles to swim out of the lake and saves herself.

Qing Yao cures the crown prince. As a result, the mystic is executed for spreading lies, and people arrested for being born on a certain date are released.

A’Mo can’t bear to talk to Lin Shaohai after finding out she was adopted, and if necessary, the Lin family will kill her to save themselves.

A’Mo pays respect to the Lin family. She thanks Lin Shaohai for taking care of a deaf orphan like her. Thus, she will always love him the most. However, she decides to leave to find her own path in life.

To remember her hometown, A’Mo takes a bit of dirt with her. Jiu Chen secretly follows her.

A’Mo doesn’t have a destination in mind. Jiu Chen keeps following her until Si Ming appears with urgent news.

After conquering the Mountain Spirit Realm, Zhong Hao seals Jing Xiu’s power, leaving Jing Xiu blind. A’Mo and Jing Xiu meet during a downpour. The roof leaks, so she gives him her umbrella. She writes in his palm to let him know there is a village nearby.