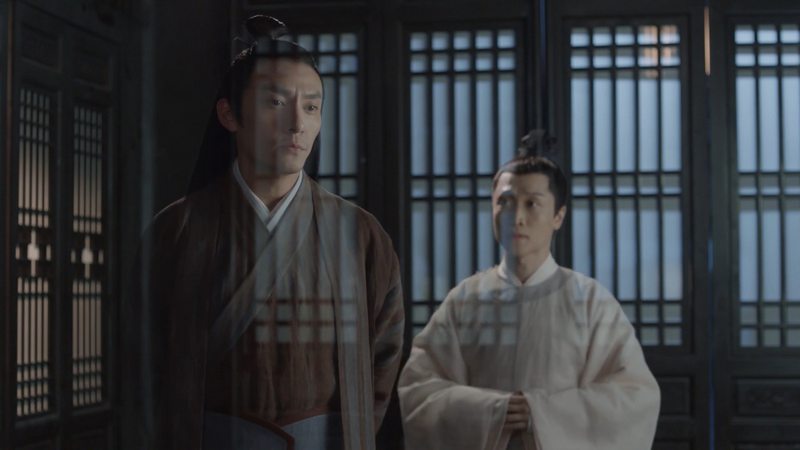 Si Ming reminds Jiu Chen not to intervene in Ling Xi’s hardships or there will be consequences. Besides, Ling Xi won’t live past 19 years old in the Mortal Realm.

Jiu Chen touches A’Mo’s head while she sleeps. Frost develops on his hand, and he becomes visible. A’Mo wakes up and sees him before he could leave.

Jiu Chen’s hands are frigid to the touch, surprising A’Mo.

A’Mo gets a basin of warm water for Jiu Chen to soak his hands. Jiu Chen takes the pouch she is making for him even though she hasn’t embroidered his name on it. A’Mo begs him to leave because it isn’t proper for them to be alone in a room.

Unable to visit A’Mo until she passes her hardship, Jiu Chen tells her to be optimistic. He puts his hand over her eyes and disappears.

Jiu Chen waits until A’Mo goes to sleep, and then he leaves.

A servant gossips with A’Mo. Recently, a man said their county doesn’t have talented scholars, so Song Ziyu challenged him and won. Song Ziyu forced him to apologize to all the scholars in the county. A’Mo is confused. The man she knows is kind, not competitive.

Lin Zhan takes her anger out on the servant gossiping with A’Mo, ordering the servant to rewash her clothes until she is satisfied.

A’Mo doesn’t know she is in danger. Far away in the capital, the crown prince is severely ill. According to a mystic, a demon has been born to jinx the crown prince. Therefore, everyone born on that date needs to be killed. Coincidentally, that is when Lin Shaohai adopted A’Mo, so it became her birthdate.

Soldiers knock on the front door and barge in to arrest A’Mo. Lin Shaohai and A’Mo escape out the back door.

The Lin family has a cabin near the mountain where Lin Shaohai and A’Mo gather medicinal herbs. Lin Shaohai tells A’Mo to trust him and leaves her at the cabin.

Late at night, Lin Shaohai returns with food. A’Mo asks why she can’t go home, but Lin Shaohai won’t say anything. A’Mo eats and loses consciousness because Lin Shaohai had tampered with the food.