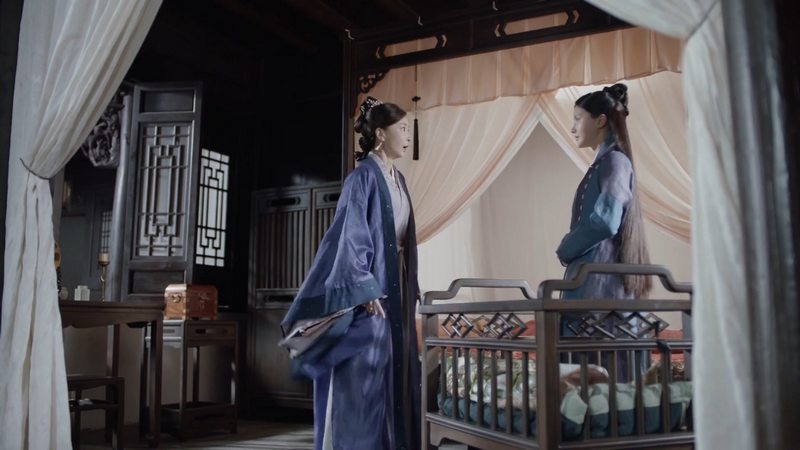 Madam Lin decides to kill the baby. Qing Yao intervenes, asking Madam Lin to accept fate and be kind to the baby.

Lin Shaohai chooses a name for the baby: Lin Mo. Her nickname is A’Mo.

Qing Yao tells Jiu Chen, Yun Feng and Si Ming about A’Mo’s disability. Si Ming begs Jiu Chen not to do anything or there will be consequences. Jiu Chen tells Si Ming to find out if someone caused A’Mo to be born deaf.

A’Mo has a demonic mark behind her ear, just like Ling Xi.

Ling Xi had loved food from the Mortal Realm, so Jiu Chen buys a snack to see how it tastes.

Seeing Jiu Chen, Zhong Hao is confident Ling Xi is still alive. A fight breaks out, and Jiu Chen splits a mountain in half with his sword. Zhong Hao and Hei Chi escape. Immortal Peng, the area’s guardian, complains because the blast by Jiu Chen injures him and destroys his cave.

Jiu Chen suppresses the demonic energy inside A’Mo so that the mark behind her ear disappears. He wishes her to be safe and happy.

The Heavenly Emperor has to resolve Immortal Peng’s grievance against Jiu Chen.

Jiu Chen says he was fighting demons. As a result, he accidentally destroyed Immortal Peng’s area. The Heavenly Emperor understands and tells Jiu Chen to apologize by giving Immortal Peng a gift.

Jiu Chen worries about the Mountain Spirit Realm, but Yun Feng says Jing Xiu can help Ling Yue deal with Zhong Hao. For now, Yun Feng will go along with Jiu Chen’s plan regarding Ling Xi, but he will retrieve the Nuwa Stone from Suoyao Tower to save Jiu Chen if Jiu Chen’s condition deteriorates.

Jiu Chen returns to Congji Abyss to check on the Shennong Cauldron.

The Heavenly Emperor punishes Yuan Tong by ordering her to go into Suoyao Tower and guard it forever. This essentially means life imprisonment in the tower.

Time flies by, and A’Mo has grown into a young girl. She is deaf, and as a result, she is also mute. A’Mo has a younger sister, Lin Zhan, whose mother is Lin Shaohai’s concubine. Lin Zhan’s friends let A’Mo play with them, and this makes Lin Zhan unhappy.