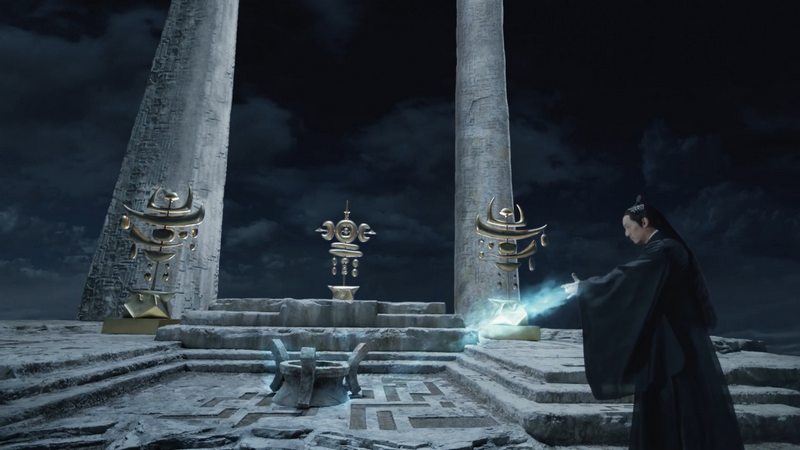 At Ziyun Platform, Jiu Chen retrieves the Shennong Cauldron hidden in the ground. Unbeknownst to everyone, the cauldron preserved Ling Xi’s soul while she was dying.

Jiu Chen uses the Shennong Cauldron to repair Ling Xi’s soul. However, all the pieces of her soul aren’t present, probably because she hated Jiu Chen and didn’t want to leave anything of herself when she died. Jiu Chen turns into a white dragon, his true form, so that he can gather the pieces of Ling Xi’s soul.

Jiu Chen’s housekeeper suspects Jiu Chen is in trouble, so he sends a message to Yun Feng.

When Jiu Chen wakes up, Qing Yao tells him to be careful when using his power even though the Fire Essence has cured his cold illness. Jiu Chen realizes Ling Xi saved him. Unconscious for one day, Jiu Chen doesn’t have a lot of time left to carry out his plan.

Si Ming tells Jiu Chen to let Ling Xi go because the sooner Ling Xi goes to the Mortal Realm, the sooner this can end. Jiu Chen hugs Ling Xi and puts her into Xixian Pond.

In the Mortal Realm, Ling Xi reincarnates into a baby abandoned in front of an orphanage. Nanny Jiang discovers her and brings her inside.

Walking home, Lin Shaohai carefully shelters the baby from the rain and kisses the baby’s forehead.

Lin Shaohai sneaks into the house and gives the baby to his wife, Madam Lin, who has been pretending to be in labor.

Madam Lin isn’t happy when she finds out the baby is a girl.

Jiu Chen and Si Ming secretly watch as the baby is presented to Old Madam Lin, who is ecstatic to finally have a grandchild. Jiu Chen worries Ling Xi would suffer in the Mortal Realm, but Si Ming thinks Jiu Chen is suffering the most.

After making sure Ling Xi is safe, Jiu Chen and Si Ming leave.

Madam Lin suspects there is something wrong with the baby, so she breaks a vase near the crib. Strangely, the baby continues to sleep soundly.

Madam Lin brings the baby to a physician for a checkup.

The physician is Qing Yao in disguise in the Mortal Realm. Qing Yao examines the baby, and she is surprised to discover Ling Xi is deaf. The diagnosis shocks Madam Lin.

Madam Lin doesn’t want a child with a disability, so she decides to kill the baby.