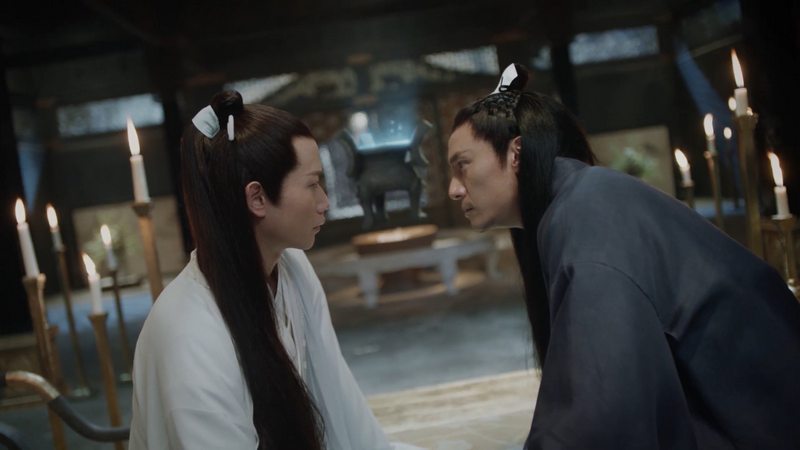 Yun Feng worries about the six realms if Jiu Chen dies. Jiu Chen says the Shennong Cauldron can remove Ling Xi’s demonic energy and mark if she reincarnates in the Mortal Realm and passes three hardships. The best time to put her into Xixian Pond is three days later when the force of the pond is weakest.

Huo Dou takes Ling Xi’s hearing, causing her to scream out in pain. In return, he gives her the Fire Essence. Ling Xi will lose her hearing in about two days.

Two soldiers tell Ling Xi that the Heavenly Emperor wants to interrogate her.

At her trial, Ling Xi pleads for mercy. The rumor she can free the Demon King has turned her into a fugitive and caused her father to die. Also, Qing Yao couldn’t possibly kill the soldiers at Ziyun Platform. The Heavenly Emperor sentences Ling Xi to death. To Ling Xi’s shock, Jiu Chen agrees with the verdict.

Ling Xi cries, remembering how Jiu Chen had promised to save her and told her to trust him.

Jiu Chen secretly communicates with Ling Xi, letting her know he will save her. Yuan Tong will be punished for killing the soldiers at Ziyun Platform. Qing Yao is in trouble for helping Ling Xi, but she will be all right. Jiu Chen says he will cultivate while Ling Xi is gone, so she won’t see him when she returns to the Heaven Realm.

Ling Xi hides the Fire Essence in the longevity knot.

The next day, soldiers escort Ling Xi to Ziyun Platform, where she will be executed.

The time frame for Jiu Chen to carry out his plan is limited. A soldier arrives, saying Ling Yue has asked the Heavenly Emperor to spare Ling Xi’s life because Ling Xi is her daughter, the elder princess of the Mountain Spirit Realm. Thunder Lord thinks this is a trick by Jiu Chen.

Saying goodbye to Jiu Chen, Ling Xi kowtows and gives back the longevity knot. A soldier arrives with a message to halt the execution. Jiu Chen insists on killing Ling Xi. Ling Xi commits suicide because she doesn’t want her death on his conscience. As she dies, she wishes she won’t remember him for all eternity.

Despite knowing Ling Xi must die so that she can be reborn, Jiu Chen returns to his residence in a daze. He cries while holding her bracelet. When night comes, Jiu Chen continues to carry out his plan.