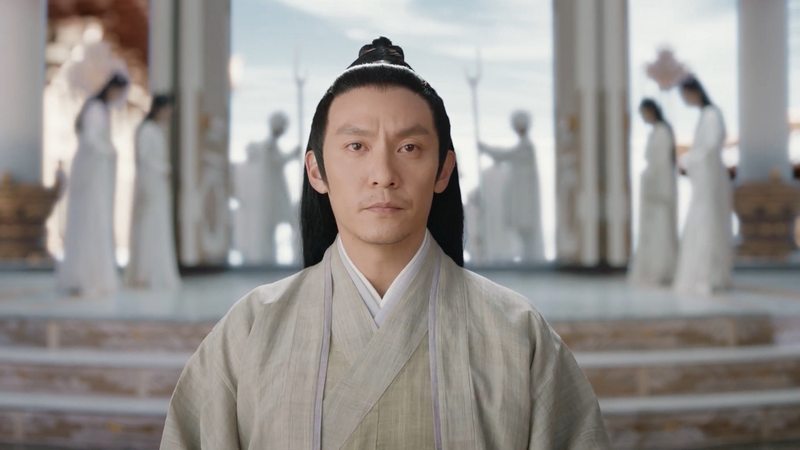 Jiu Chen blames himself for not noticing Yuan Zheng had turned demonic. Jiu Chen was the commander, so he takes full responsibility for what happened at Mount Youdu. The Heavenly Emperor spares the Yuan clan. As for Jiu Chen, he will be struck by lightning seven times.

Jiu Chen arrives at Ziyun Platform to receive his punishment.

To save Jiu Chen from falling into a deep sleep again, Qing Yao seals his power for 49 days. If Jiu Chen rests and takes care of his health, he will recover.

Ling Xi stays in Jiu Chen’s room to care for him. Afraid he would be cold, she places burning braziers around his bed. She also shuts the windows and doors to keep in the heat. Eventually, she falls asleep by his bed.

After a week, Jiu Chen wakes up, feeling dizzy and weak like he has been poisoned. He asks Ling Xi if she knows that placing burning braziers in a closed room for a prolonged period is dangerous. This can kill humans, or in his case, a god whose power has been sealed. Ling Xi runs to open the windows and doors.

Ling Xi tells Jiu Chen not to sit outside in the damp air. Jiu Chen ignores her. Now he has to blow on his tea to cool it before drinking it. Ling Xi tries not to laugh.

Yu Li sees Ling Xi at Jiu Chen’s residence and realizes this is the maid who saved Jiu Chen. Yu Li warns Ling Xi not to have romantic hopes about Jiu Chen. In terms of looks, cultivation level and status, Yu Li beats Ling Xi in all aspects.

Jiu Chen can sleep while sitting straight, so Ling Xi mimics him.

Jiu Chen watches Ling Xi sleeping while sitting, swaying in different directions. Her antic makes him laugh. His demeanor turns back to serious when Ling Xi wakes up. He gives her Zhu Rong’s heat box because it can help her cultivation.

Ling Xi places the heat box near where she sleeps. In the middle of the night, the mark behind her ear emits demonic energy, which goes into the heat box. Her necklace’s pendant alerts her father at Peach Forest, but he is sleeping and misses the warning.