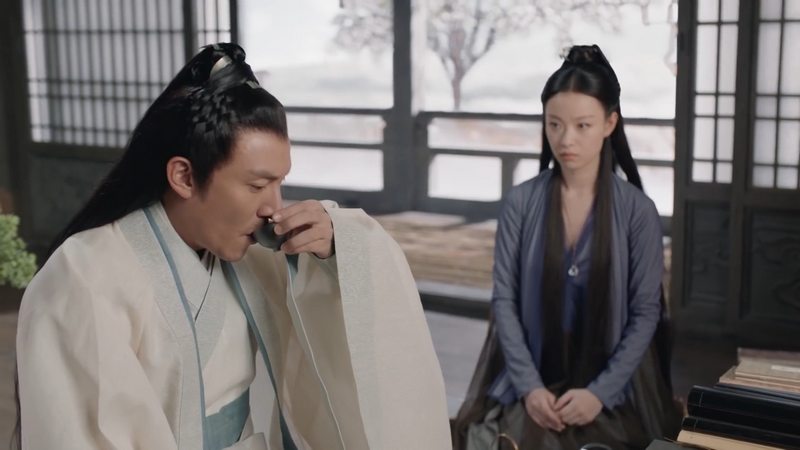 Jiu Chen keeps drinking tea to stay awake while working. Ling Xi worries he is drinking too much tea.

Jiu Chen can’t wave a finger to extinguish the candles in his room. Now he has to blow them out one by one. After drinking so much tea during the day, he can’t sleep at night.

Jiu Chen wants to go for a stroll and tells Ling Xi not to follow him.

Ling Xi follows Jiu Chen, and she hides by turning invisible or into a rock when he looks her way. Jiu Chen confronts her.

Caught in the rain, Ling Xi holds an umbrella over Jiu Chen’s head. Jiu Chen orders her to stop following him.

Yun Feng says it isn’t possible to get near gods with deep cultivation like him or Jiu Chen. Ling Xi remembers one of the panels in a cave at Immortal Elder Nanji’s place showed her kissing Jiu Chen, which means Jiu Chen would have to allow her to kiss him.

Qing Yao tells Jiu Chen to be careful when using his power. His cold illness has receded, but it isn’t gone completely.

Ling Xi tells Yuan Tong that Jiu Chen wants to see her. A loud noise interrupts their conversation. It is Old Madame Yuan, and she has killed herself with Yuan Zheng’s weapon. Devastated, Yuan Tong looks at Ling Xi with hatred.

Jiu Chen finds Ling Xi crying in an isolated spot. He tells her not to blame herself. It’s Old Madame Yuan’s fault for putting the Yuan clan’s prestige above everything. Consequently, it’s fated Yuan Zheng and Yuan Tong would do wrong things to appease their mother’s ambition. Ling Xi wonders if it’s possible to escape fate.

Ling Xi asks Jiu Chen about her bracelet. Jiu Chen says the bracelet recognizes her as its owner, so she can’t remove it. He thinks she should let Immortal Elder Nanji know she has it now. Ling Xi doesn’t dare to go by herself, so Jiu Chen offers to go with her.

As Jiu Chen and Ling Xi leave the Heaven Realm, they pass by Yuan Tong, who is one of the gatekeepers. Yuan Tong greets them. Jiu Chen ignores her while Ling Xi bows in response.

Ling Xi asks Jiu Chen if they can travel on a cloud together. Jiu Chen tells Ling Xi to turn into a bird and fly.

Busy with cultivation, Immortal Elder Nanji isn’t available. Nevertheless, he knew Jiu Chen and Ling Xi would come, so he told his disciples to tell Jiu Chen to accept what is destined, meaning Ling Xi should keep the bracelet. Jiu Chen says the “treasure” will be used well.

Yu Li’s bird poops on Ling Xi. Just as Ling Xi is about to teach it a lesson, Yu Li stops her and wants her to apologize to the bird. Ling Xi won’t do it. Yu Li’s bird scratches Ling Xi’s hand and flies away.