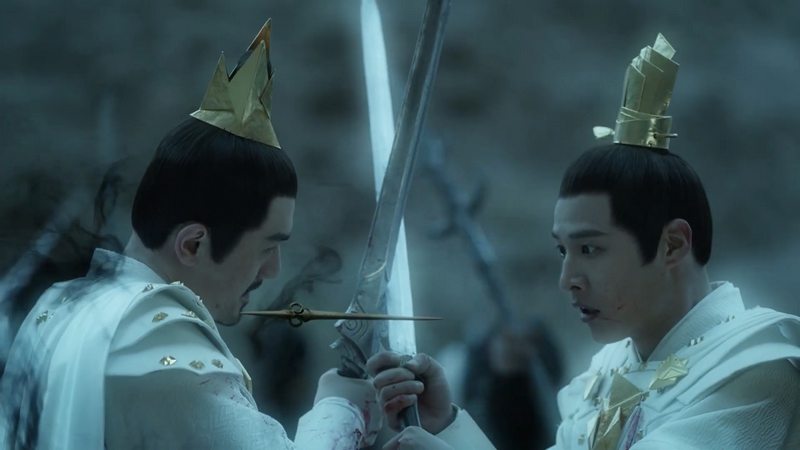 Jiu Chen had to kill Yuan Zheng. Yuan Zheng begged Jiu Chen to take care of the Yuan clan, so Jiu Chen promised he would keep what happened a secret.

Qing Yao says Jiu Chen was willing to take the blame to protect the Yuan clan. It’s Old Madame Yuan’s fault for forcing the issue to the point of no return.

Ling Xi’s external wounds are expected. Qing Yao worries about Ling Xi’s internal wounds, sustained from being in Xixian Pond for an entire night. Ling Xi might never be able to move to the next cultivation level if she doesn’t heal completely.

Ling Xi regains consciousness while Jiu Chen is taking care of her. She doesn’t want him to stop, so she pretends she is still unconscious. Jiu Chen sees through the ruse.

Du Yu begs Jiu Chen to save Yuan Tong and the Yuan clan. Yuan Tong had a letter from Yuan Zheng, which could prove Jiu Chen’s innocence, but Du Yu convinced her to destroy it, thinking Jiu Chen could deal with anything given his status.

Jiu Chen tells Ling Xi to stop pretending she is unconscious. He gives her a rare pill, the last one he has, that speeds up her healing. Ling Xi wishes Yuan Tong would apologize to her. Moreover, Ling Xi wants to forbid Yuan Tong from eating for 100 years. Lastly, Ling Xi wants all the treasures Yuan Tong accumulated while being a general.

Ling Xi asks Jiu Chen where they are going, but he won’t tell her.

Jiu Chen says it’s unforgivable what Yuan Tong did, especially since she tried to kill Ling Xi. Jiu Chen destroys Yuan Tong’s cultivation for the past 50,000 years and demotes her to a regular soldier. He also orders Yuan Tong to apologize to Ling Xi, not eat for 100 years and hand over the treasures she accumulated during her time as a general to Ling Xi.

Ling Xi can’t stop smiling and thanks Jiu Chen for taking revenge for her. Jiu Chen denies doing that. To him, Yuan Tong’s punishment is justified.

Qing Yao says the only way to cure Jiu Chen’s cold illness is to seal his power for 30 to 50 years. During this time, Jiu Chen will be helpless like people in the Mortal Realm, feeling hunger, tired, etc. Yun Feng supports this idea enthusiastically and gets a glare from Jiu Chen.

After Qing Yao leaves, Yun Feng rambles on about how he is falling in love with her. Jiu Chen walks away, not interested in Yun Feng’s nonsense.