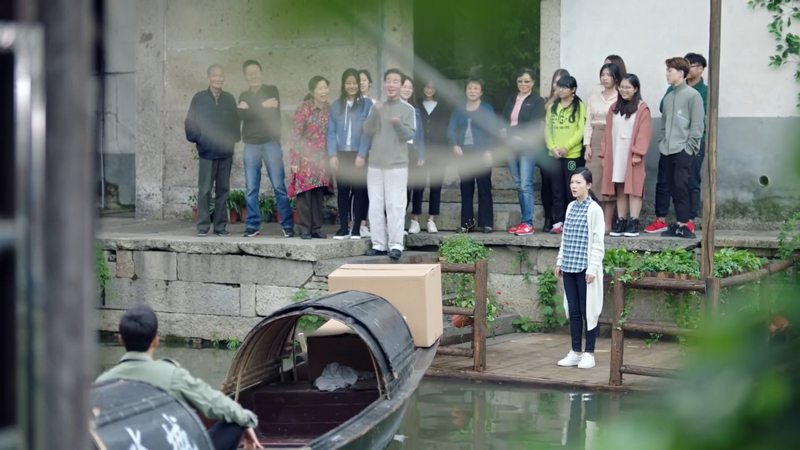 In the morning, Su Yunjin hears Cheng Zheng calling for her. Somehow, he has borrowed a canoe to deliver animal lanterns. The commotion attracts the attention of her neighbors. She explains that he’s her friend, not her boyfriend. Then she grabs the paddle and orders him to stay still. When the delivery is over, she wants him gone.

While Su Yunjin rows, Cheng Zheng tries to engage her in conversation. She tells him to be quiet.

After delivering the animal lanterns, Cheng Zheng is surprised to see how little Su Yunjin is paid. She plans to walk home and let him figure out how to return the canoe. Wanting to go back together, he picks her up and carries her into the canoe.

Despite not knowing how to row, Cheng Zheng figures out a way by bracing the paddle against his foot. After a while, Su Yunjin realizes they’re not going home.

Cheng Zheng gets to his destination, but Su Yunjin won’t get off the canoe. She doesn’t want to go anywhere with him. He takes her bag, forcing her to follow him.

At a store selling men’s clothes, Cheng Zheng reminds Su Yunjin to buy a gift for Uncle Ding. She can’t decide between a black shirt or a maroon shirt, so he convinces her to go with maroon. Grabbing a cheap shirt, he tells her to buy it for him since he’s been a big help to her. Then he bargains with the clerk for a discount.

Cheng Zheng is happy. Even though he forced Su Yunjin to buy him a shirt, he considers it a gift from her. She can’t believe he could be so childish. Nevertheless, she’s grateful to him for reminding her to buy something for Uncle Ding.

Su Yunjin has to return to college. Before leaving, she gives Uncle Ding the maroon shirt. The gesture surprises him and lessens the tension between them.

Cheng Zheng accompanies Su Yunjin as she leaves home. He gives her wildflowers and asks for another chance. She tells him to stop talking nonsense because she’s dating Shen Ju’an. He accuses her of lying to herself. Whenever she needs help, it’s always been him who helps her, not Shen Ju’an. She says she’s never asked for his help. More importantly, she doesn’t like him.

Cheng Zheng is depressed and drinking wine. Zhou Ziyi tells Cheng Zheng to forget about Su Yunjin. She’s blunt and heartless. What’s so good about her? Cheng Zheng refuses to give up because he feels he can beat Shen Ju’an. Both of them are surprised by Shen Ju’an’s appearance. Naturally, they have to spy on him.

Shen Ju’an drives Zhang Yue home, and Cheng Zheng goes with them. Cheng Zheng is sullen and acts childishly in the car, causing Zhang Yue to laugh. When they arrive, Shen Ju’an watches as Cheng Zheng and Zhang Yue go inside her home.

Cheng Zheng warns his cousin not to have a romantic relationship with Shen Ju’an, who isn’t trustworthy. Zhang Yue teases him because she has figured out why he’s in Shanghai. She says if she dates Shen Ju’an, he would have a better chance with Su Yunjin. She locks the front door to prevent him from leaving. No matter what, he must go back to Beijing tomorrow.

Cheng Zheng calls Su Yunjin. As soon as he mentions Shen Ju’an, she hangs up and unplugs the phone.