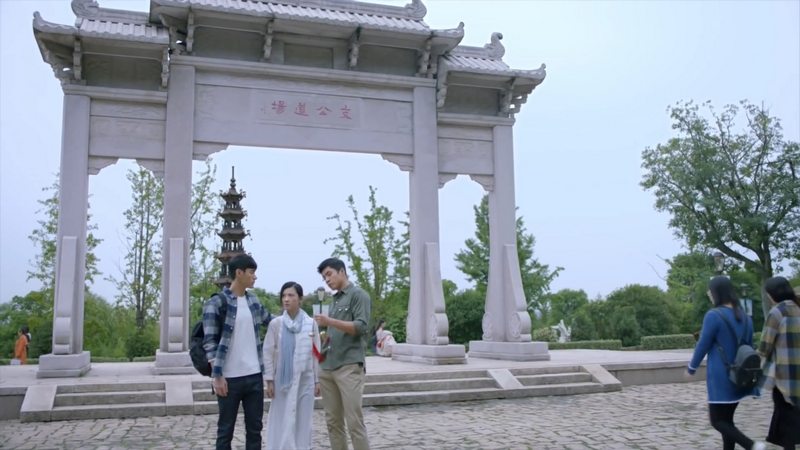 Cheng Zheng dangles the trinket in front of Su Yunjin, but she won’t take it. Running out of patience, he shoves it into her backpack.

Cheng Zheng watches as Su Yunjin and Shen Ju’an worship Buddha. Shen Ju’an encourages Cheng Zheng to do the same. Even if he might not get what he hopes for, praying could bring peace of mind. Cheng Zheng says he isn’t superstitious.

Su Yunjin writes down her wish, so Cheng Zheng does the same. Then he donates a lot of money so that his wish can come true. He’s angry because he thought she doesn’t know how to like someone, but it turns out she just doesn’t like him. He doesn’t understand why she won’t give him a chance. She says she can’t stand him because he’s always unreasonable.

It begins to rain as Cheng Zheng, Su Yunjin and Shen Ju’an leave the temple. Cheng Zheng has a taxi waiting, but Su Yunjin rather takes the bus. Shen Ju’an is afraid it’s not possible to catch a bus as the rain worsens. Reluctantly, Su Yunjin gets into the taxi. However, she says she’s carsick and sits in the front beside the driver even though Cheng Zheng holds open a rear door for her.

Su Yunjin asks Cheng Zheng where he is staying. As the taxi drives past Hengkai Company, Cheng Zheng says he can always go there if he doesn’t have anywhere else to go. He invites Su Yunjin and Shen Ju’an to have a meal with him.

Cheng Zheng orders beer and goads Su Yunjin into drinking it even though she says she doesn’t drink beer. Shen Ju’an says he and Su Yunjin understand each other from the first moment they met, unlike her and Cheng Zheng even if Cheng Zheng knows her longer. Cheng Zheng asks why Su Yunjin lied about going to Beijing when she had no intention of doing so.

Feeling drunk, Su Yunjin runs out of the restaurant to throw up. Shen Ju’an tells Cheng Zheng to stop obsessing about the past. Moreover, Cheng Zheng can’t force her to like him. Although mad, Cheng Zheng still tries to get a taxi to take Su Yunjin back to her dorm.

The next morning, Su Yunjin tells Shen Ju’an that there’s nothing between her and Cheng Zheng. Since they’re being frank with each other, Shen Ju’an says he’s decided to go work for Hengkai Company. Given the company’s prestige, he can’t turn down this opportunity. It’s risky compared to studying for a graduate degree, but he’s looking forward to the challenge.

On the day of the soccer match, Su Yunjin and Mo Yuhua see each other in the stands. Unexpectedly, Mo Yuhua says Cheng Zheng is still in Shanghai.

Shen Ju’an invites Su Yunjin and Mo Yuhua to go eat with him after the game.

Zhang Yue scolds Cheng Zheng for taking off a week from school to come to Shanghai. However, she covered for him by telling his mom that he’s helping her with a project. Shen Ju’an knows Zhang Yue because she offered him a job at Hengkai Company. Seeing Zhang Yue and Cheng Zheng together, Shen Ju’an realizes Cheng Zheng’s background is not simple.

Su Yunjin gets a call from her mother.