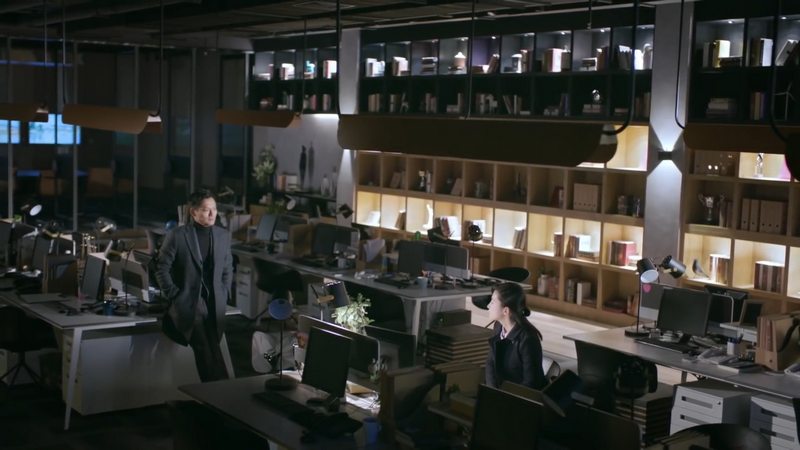 CEO Xu has an empty house Su Yunjin can stay at. Su Yunjin turns down his offer, so he reserves a room at a hotel for her, paid by the company. He can drive her to the hotel, but she says she can go by herself.

As Su Yunjin walks to a taxi, a woman rushes from behind and pushes her aside to get into the taxi first. As a result, Su Yunjin drops her plant, breaking it. Su Yunjin picks up what’s left of the plant and cries. CEO Xu stops his car and helps her.

Su Yunjin asks CEO Xu about her plant. CEO Xu takes it out of the trunk of his car and gives it to her.

CEO Xu guesses Su Yunjin argued with her boyfriend. To him, this isn’t necessarily bad. It’s worse when people don’t care enough to argue with each other. Su Yunjin never thought her argument with Cheng Zheng would lead to a break-up. Given her personality, he says maybe she should be with someone who is more mature.

After a few days, Zhou Ziyi calls Su Yunjin, asking if she has heard from Cheng Zheng. Su Yunjin doesn’t know anything. They decide to go to Cheng Zheng’s house to look for him.

Time flies by, and Su Yunjin graduates from college. Busy with meetings and projects, she continues to work for CEO Xu.

Zhou Ziyi’s father is sick, so Zhou Ziyi calls Cheng Zheng with the bad news. This prompts Cheng Zheng to return to China.

Su Yunjin catches up with Mo Yuhua, who is still studying abroad. Su Yunjin doesn’t know what has happened to Cheng Zheng ever since their break-up. Although Mo Yuhua thinks of Zhou Ziyi from time to time, she is more worried about Su Yunjin.

As soon as Cheng Zheng is back, he goes to see Zhou Ziyi immediately. Zhou Ziyi’s father has late-stage cancer and doesn’t have much time left. Actually, Zhou Ziyi’s father knew a long time ago and kept it a secret. Zhou Ziyi thinks about the trouble he caused and regrets not being a better son.

Returning to work, Cheng Zheng apologizes to his boss for leaving suddenly. Nevertheless, Cheng Zheng still turned in his designs on time from abroad. The designs have all sold, so his boss gives Cheng Zheng a share of the profit.

Finally having enough money, Cheng Zheng buys the couple rings he previously wanted to buy for himself and Su Yunjin. At this time, Su Yunjin’s taxi drives past the same jewelry store. Hanging the rings on the mirror inside his car, Cheng Zheng remembers a happier time between him and Su Yunjin.

At her place, Su Yunjin also has trouble falling asleep.

Chen Xiaoyu is heavily pregnant. She feels tired while out walking with Cheng Zheng, so they stop at a place called The Y Bar.

The owner turns out to be Shen Ju’an. Cheng Zheng and Shen Ju’an greet each other, surprised to meet again. Shen Ju’an says Cheng Zheng can get a discount by subscribing to The Y Bar’s WeChat account.

Cheng Zheng tells Shen Ju’an that Zhang Yue’s dream is to own a place like The Y Bar, but now, she has become a workaholic at Hengkai Company. Thinking about what happened, Shen Ju’an regrets focusing on his career and taking her love for granted. The confession makes Cheng Zheng realize that Shen Ju’an did love Zhang Yue.

CEO Xu tells Su Yunjin something surprising: their boss’s son is interested in her. CEO Xu thinks she is better off with someone more mature, so he rejected the boss’s son for her already. Su Yunjin thanks CEO Xu for helping her.

Su Yunjin’s assistant is eager for gossip about CEO Xu and Su Yunjin. Now that CEO Xu and his wife have divorced, he might pursue Su Yunjin. Su Yunjin tells her assistant to stop talking nonsense and focus on her work.

Cheng Zheng accompanies Chen Xiaoyu to the same hospital for a check-up.

While waiting for an elevator, Su Yunjin and Mo Yuhua run into Cheng Zheng, who is with Chen Xiaoyu. In shocked silence, Cheng Zheng and Su Yunjin look at each other. Cheng Zheng says a brief greeting and then asks Mo Yuhua where the ultrasound room is located.

After Cheng Zheng and Chen Xiaoyu walk away, Mo Yuhua is upset while Su Yunjin stays silent. Mo Yuhua can’t believe it. Why haven’t they heard about Cheng Zheng’s marriage?

Although Su Yunjin appears calm, she leaves the hospital in a daze. She mistakes the entrance of the parking garage for the exit and nearly collides with another car. Alone in her car, she finally breaks down and cries.