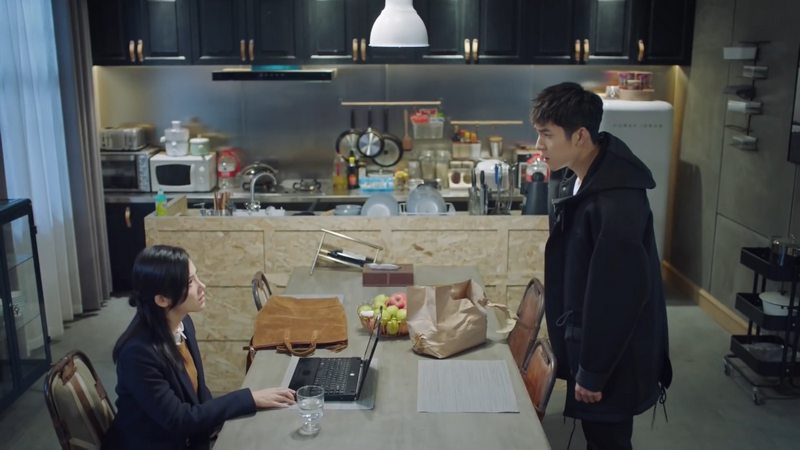 Su Yunjin apologizes to Cheng Zheng, but Cheng Zheng is fed up with her excuses. Unable to reason with him, she starts working on the project she brought home. He grabs her file and rips it up in anger, demanding to know what is more important: him or her work?

The next morning, Su Yunjin still prepares breakfast for Cheng Zheng even though she has to go to work early. Cheng Zheng says his mother wants him to return home for the weekend. Su Yunjin says she also plans to visit her mother.

Meng Xue invites Su Yunjin to a gathering of their high school classmates. Actually, Meng Xue called Cheng Zheng already and thought he could let Su Yunjin know, but he refused to do it. This causes Meng Xue to think Cheng Zheng and Su Yunjin have argued. Not wanting Meng Xue to get any ideas, Su Yunjin says Cheng Zheng must have been joking.

Cheng Zheng and Su Yunjin go to the gathering separately. Coincidentally, they bump into each other in an elevator. They exchange glances uncomfortably, not knowing what to say.

When it’s time to eat, Cheng Zheng and Su Yunjin don’t sit together. Zhou Ziyi, finding himself next to Cheng Zheng, offers to switch places with Su Yunjin, but Su Yunjin says there is no need. Hearing her answer, Cheng Zheng starts drinking. Jin Zi asks Su Yunjin if she is unhappy because he often saw the same expression on Mo Yuhua’s face. Su Yunjin says she is just tired.

Zhou Ziyi tells Cheng Zheng not to drink. Cheng Zheng ignores the advice and continues drinking anyway. Su Yunjin begs Cheng Zheng to stop, but he won’t listen to her. Worried for Cheng Zheng, Meng Xue offers to drink on his behalf.

Zhou Ziyi receives a call from Mo Yuhua. He tells her to berate Cheng Zheng, who is drinking too much and isn’t taking care of his health. Cheng Zheng deflects the attention away from him by mentioning Jin Zi, who is eager to talk to Mo Yuhua.

Su Yunjin tries to get Cheng Zheng, who is drunk, to go home with her. Cheng Zheng pushes her away and bumps into Meng Xue, who lets him lean on her so he wouldn’t fall down. He says Su Yunjin can stay out late at night and get drunk, then he can do the same. Zhou Ziyi promises to take care of Cheng Zheng, so Su Yunjin goes home by herself.

Cheng Zheng returns home and finds Su Yunjin waiting for him. He feels foolish trying to provoke her. She is like a robot, never reacting to anything. She is thoughtful towards everyone except him. Is she with him because she pities him? She says she respects whatever decision he makes. He says he doesn’t think he succeeded in making her love him, so let’s break up.

Su Yunjin packs her things, taking the plant Cheng Zheng gave her on their first date with her. She puts her house key on a table in the living room. Crying, she leaves the house, shutting the front door for the last time.

Hearing the front door closes, Cheng Zheng walks out of his room. He cries, seeing the house key Su Yunjin left behind.

Walking aimlessly, Su Yunjin remembers a happier time with Cheng Zheng. He had promised he would never let her go or allow her to leave him.

Zhou Ziyi checks with Cheng Zheng to see if everything is all right. Cheng Zheng says he and Su Yunjin just broke up.

In the middle of the night, Su Yunjin can’t think of anywhere else to go except her company. CEO Xu is still there. He tells her his relationship with his wife isn’t good, so his wife doesn’t care what he does.

Zhou Ziyi can’t believe how the situation between Cheng Zheng and Su Yunjin could spiral out of control so quickly. Cheng Zheng says he doesn’t feel like Su Yunjin loves him. Zhou Ziyi disagrees, naming everything Su Yunjin has done for Cheng Zheng, from doing the laundry to cooking to cleaning the house. Worried for Su Yunjin, they decide to go look for her.