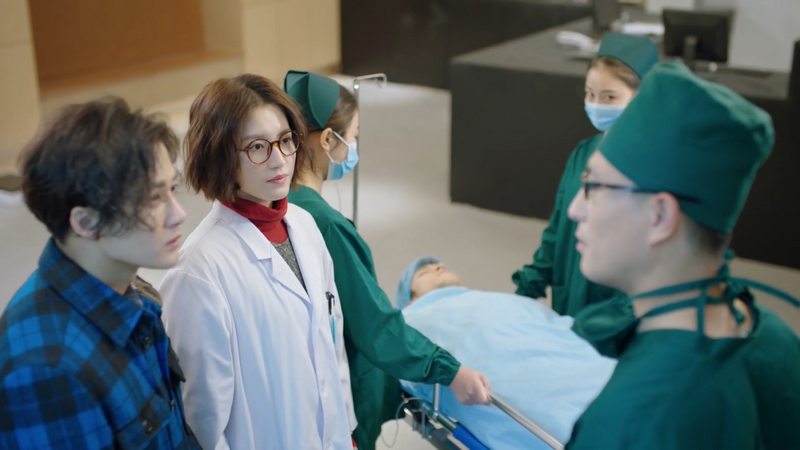 Cheng Zheng’s operation is successful. The doctor tells Zhou Ziyi and Mo Yuhua that Cheng Zheng needs to stay in the hospital for a few days to recuperate.

The meeting ends later than expected. The client likes Su Yunjin’s plan, so CEO Xu pushes her to finish the project before she leaves the company. Su Yunjin checks her phone and sees Mo Yuhua’s text messages about Cheng Zheng. Seeing Su Yunjin in a rush to get to the hospital, CEO Xu offers to take her there.

When she finds Cheng Zheng at the hospital, Su Yunjin says she couldn’t check her phone during her meeting, so she didn’t know what happened to him. It’s late, so Zhou Ziyi, Mo Yuhua and CEO Xu go home while Su Yunjin stays to take care of Cheng Zheng. Su Yunjin tells CEO Xu she won’t be able to finish the client’s project quickly.

After everyone leaves, Su Yunjin apologizes to Cheng Zheng, feeling terrible because she wasn’t with him when he needed her.

In the middle of the night, Cheng Zheng wakes up in pain. Su Yunjin panics and gets a doctor for Cheng Zheng. After an examination, the doctor says it’s normal to feel pain because the anesthesia is wearing off.

Cheng Zheng didn’t like being sick in the beginning, but now he is glad because he has Su Yunjin’s attention.

As usual, Cheng Zheng and Zhang Yue bicker when they are around each other. Cheng Zheng’s mother doesn’t want to leave. Once again, Cheng Zheng tells his mother to go home.

Su Yunjin gets a call from Elsa, who asks to meet as soon as possible to work on the client’s project. Since Su Yunjin is taking time off from work, CEO Xu assigned Elsa to help out. Cheng Zheng isn’t happy with how hard Su Yunjin’s company pushes her. He tells Su Yunjin to stay home and be a housewife.

Elsa comes to the hospital to discuss the client’s project with Su Yunjin. Annoyed, Cheng Zheng tells Su Yunjin to work at Hengkai Company if she insists on having a career. Su Yunjin stays silent, not wanting to provoke him further.

Mo Yuhua visits Cheng Zheng before going abroad. Worried about Cheng Zheng and Su Yunjin, Mo Yuhua tells him to be patient and cherish his relationship. After all, it wasn’t easy for him and Su Yunjin to be together.

Su Yunjin and Jin Zi go to the airport with Mo Yuhua. Su Yunjin tries not to cry while Jin Zi gives Mo Yuhua a book by his favorite poet. Arriving late because of traffic, Zhou Ziyi asks Mo Yuhua if she would change her mind if her friends want her to stay. Mo Yuhua says she won’t, joking about losing money if she cancels her ticket.

Cheng Zheng is discharged from the hospital. The doctor’s instruction is for Cheng Zheng to rest and come back in a week for a check-up. Cheng Zheng and Su Yunjin smile happily. Finally, they can go home!

At home, Su Yunjin covers Cheng Zheng with a blanket and puts what she thinks he needs within his reach. Unfortunately, she has to go to work. Therefore, he will be home alone. He can call her if he needs her. She promises to answer her phone immediately.

Su Yunjin and Elsa finish the client’s project. CEO Xu praises them for working well together. A meeting has been scheduled tomorrow to present the project to the client.

Su Yunjin asks CEO Xu if she can skip the meeting because she wants to take Cheng Zheng to his check-up. CEO Xu gives his permission. However, she is in charge of the project, so he prefers her to attend the meeting.

Su Yunjin tells Cheng Zheng that Zhang Yue will take him to his check-up. Cheng Zheng is upset again because she is always busy working. If she were sick, he would be near her to care for her.

The meeting with the client ends well, and the client invites everyone out to dinner. Su Yunjin wants to go home, but the client won’t take no for an answer because she contributes the most to make the project a success.

After Cheng Zheng’s check-up, Zhang Yue takes Cheng Zheng out to dinner. Although he can’t eat seafood during his recovery, he chooses to go to a seafood restaurant so that he can buy crabs for Su Yunjin.

Cheng Zheng can’t get into the house because he forgot his key, so he calls Su Yunjin. CEO Xu answers her phone and says Su Yunjin drank too much and isn’t feeling well. Cheng Zheng wants to go get her, but CEO Xu won’t tell Cheng Zheng the location, afraid Cheng Zheng would disrupt their celebration. CEO Xu says a female colleague will take Su Yunjin home.

Cheng Zheng angrily throws the crabs he bought for Su Yunjin on the ground.

Su Yunjin is drunk and falls asleep on a couch as the dinner continues without her. Elsa switches Su Yunjin’s phone to vibration mode. As a result, Cheng Zheng continues calling Su Yunjin, but no one answers.

Thanking Elsa for taking her home, Su Yunjin is surprised to see Cheng Zheng outside the house. Su Yunjin opens the door while Elsa explains to Cheng Zheng what happened at dinner. Elsa picks up the bag of crabs he had thrown on the ground and gives it to Su Yunjin. Su Yunjin asks him what is in the bag. Cheng Zheng says it’s trash.