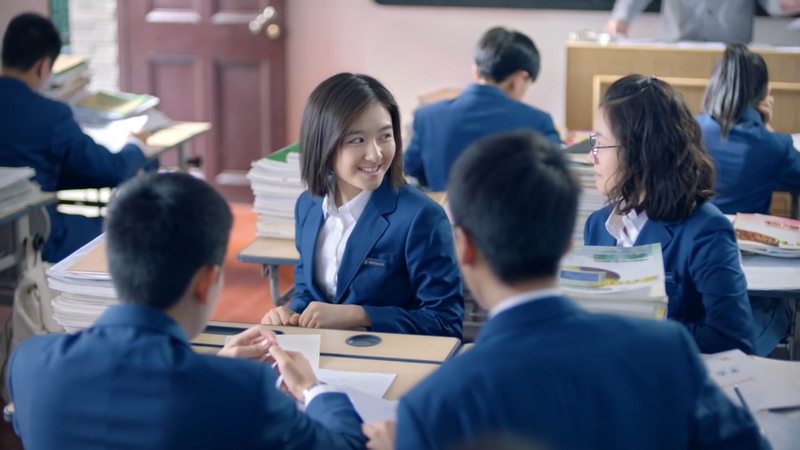 [flashback] The teacher returns graded tests to the class. Cheng Zheng takes his test and also gets Su Yunjin’s test for her. Cheng Zheng looks pessimistic, so Su Yunjin thinks she did badly, but he’s teasing her. Upon seeing her grade, she smiles. He says her reward for getting a good grade is she gets to watch him play soccer.

At the next soccer match, Cheng Zheng keeps checking the stands, but Su Yunjin isn’t there. He kicks his opponent out of frustration and gets a yellow card. She arrives late with Mo Yuhua. His mood improves and he begins to score.

Cheng Zheng’s team wins first place. Since Cheng Zheng led the team to victory, he gets to give a speech. He says the first airplane was thought of like a weird bird, but it was the start for people to conquer the sky. Therefore, let’s not judge students who don’t do well in school. They could be gifted in other areas, and if they work hard, they can do amazing things later on.

Instead of hanging out with his friends, Cheng Zheng spends his time tutoring Su Yunjin. As her grades improve, her relationship with him also improves.

Su Yunjin treats Cheng Zheng to a big meal at KFC to thank him. Unknowingly, she has ketchup on her lips, so he helps her wipe it off. Unfortunately, their teacher sees them.

The teacher talks to Su Yunjin first, reminding her about the school’s rules forbidding students to date. At this age, students should only concentrate on studying. She stays silent while he scolds her.

Then the teacher talks to Cheng Zheng. Cheng Zheng hears that Su Yunjin didn’t say anything, which seems like she didn’t deny their relationship, so he’s happy and praises her. The teacher becomes more annoyed and says Cheng Zheng needs to turn in a letter of repentance.

Cheng Zheng returns to class. He sees Su Yunjin carrying her books and moving to another desk far away from him. [flashback ends]

On the way to the wedding, Cheng Zheng stops by his old high school. His phone stops working, so he doesn’t realize he’s late.

The wedding begins. Su Yunjin and Mo Yuhua are happy for Song Ming, who persisted from high school and finally wins Meng Xue’s heart. Suddenly, a student disrupts the ceremony with news about Cheng Zheng. Apparently, Cheng Zheng was in a car accident. He’s fine, but he won’t be able to make it to the wedding.

Zhou Ziyi rushes to the scene of the accident. The driver at fault says he was distracted by his phone and would have hit two students if Cheng Zheng’s car hadn’t blocked his way.

[flashback] After school, Cheng Zheng waits for Su Yunjin. He says they didn’t do anything wrong. There’s no need to worry about gossip. She ignores him.

When Su Yunjin returns home, her mother says her father is back from the hospital. The doctor didn’t stop him because there’s nothing left that can be done.

Su Yunjin checks on her father. Her father remembers how she used to talk nonstop when she was little. She shows her father the latest report card, making him happy with her improved grades.

At school, Su Yunjin tells Cheng Zheng that the college entrance examination is coming up. Hence, she wants to cut off all contacts with him. If he bothers her, she will transfer school. In exchange for having tutored her, he asks her to choose a college in Beijing.

The teacher calls Su Yunjin’s name, looking alarmed. Su Yunjin knows it’s about her father, so she leaves school. As she pedals as fast as she could, the front bicycle tire deflates. Cheng Zheng, who has been following behind, catches up and takes her to the hospital.

At the hospital, Su Yunjin finds her mother, who is standing in front of an operating room. A doctor talks to her mother and shakes his head. Su Yunjin and her mother hug each other and cry. Watching them, Cheng Zheng also becomes emotional.

Darkness has fallen. After searching for a long time, Zhou Ziyi finds Cheng Zheng sitting outside the hospital. [flashback ends]

[flashback] After her father’s funeral, Su Yunjin returns to class and sees Meng Xue taking up a donation for her. Meng Xue says Su Yunjin’s family is poor, so it’s hard for them to pay the hospital bills. Cheng Zheng yells at Meng Xue to stop because she is insulting Su Yunjin by turning the donation into a spectacle.

Su Yunjin walks outside. Worried, Cheng Zheng follows her. She tells him to leave her alone.

As the day of the college entrance examination draws closer, students push themselves to study harder, especially Su Yunjin.

Cheng Zheng’s mother sees Cheng Zheng researching schools in Beijing. She teases him for being in a hurry to leave his parents.

It’s the day of the college entrance examination. When the test is over, students cheer and toss away their books. To celebrate, Zhou Ziyi invites the class to go sing karaoke. Mo Yuhua convinces Su Yunjin to go. [flashback ends]

After the wedding, Meng Xue apologizes to Su Yunjin for what happened in the past. Su Yunjin hugs her, letting her know that all is forgiven.