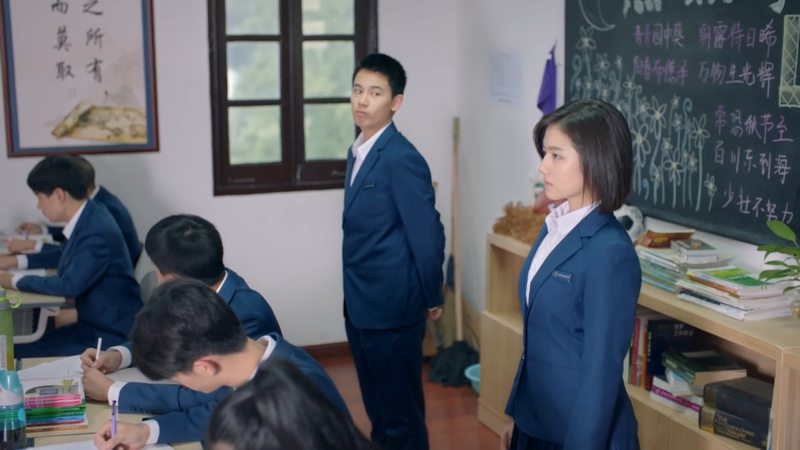 [flashback] Cheng Zheng teases Su Yunjin by kicking her chair and throwing paper balls at her. As a result, the teacher punishes both by making them do math problems on the blackboard. Cheng Zheng pretends he doesn’t know how to do it to cover for Su Yunjin. Fed up, the teacher yells at them to go stand at the back of the class.

Later, Cheng Zheng shows Su Yunjin how to solve the math problem she couldn’t do on the blackboard. There are two ways to do it using the teacher’s method or Cheng Zheng’s method. He berates her for not understanding something so simple. She glares at him and runs away.

Mo Yuhua follows Su Yunjin. Patiently, she explains the math problem until Su Yunjin understands. Mo Yuhua looks over Cheng Zheng’s notes and praises his cleverness. Su Yunjin envies Cheng Zheng and Mo Yuhua for doing well in school without having to work hard. She would be happy if she can get into a good college so she can get a good job and take care of her parents. [flashback ends]

Su Yunjin wants to buy new clothes to wear to the wedding. She calls Mo Yuhua to see if Mo Yuhua has time to go shopping together. After many years, the two of them are still good friends, but Mo Yuhua is a busy doctor. Mo Yuhua wonders what’s become of Cheng Zheng. Su Yunjin says if she sees him again, she hopes she has a happier life than him.

Suddenly, Su Yunjin leaves with her math book. Cheng Zheng tells her he can teach her. There’s no need to go to the teacher to ask for help. She says she’s going to the bathroom, but he doesn’t believe her. He grabs her math book, and a sanitary pad falls out. She picks it up and runs away. Zhou Ziyi tells Cheng Zheng to stop harassing her.

After a while, Su Yunjin returns to class. Cheng Zheng asks the teacher for permission to go to the bathroom. Actually, he goes outside to get a bottle of hot water for Su Yunjin. She ignores the peace offering and puts it back on his desk.

To see Su Yunjin, Cheng Zheng goes to the bookstore where she works. He threatens to complain to the owner if she keeps telling him to go away. Aware of her “condition,” he doesn’t want her to stand on a stool to retrieve books for him. Another argument occurs, and they end up knocking over a pile of books. The owner orders them to clean up the mess.

When Cheng Zheng and Su Yunjin finish organizing the books, it’s time for the bookstore to close. She can’t take it anymore and begs him to leave her alone. She will move to another desk if he doesn’t like her sitting in front of him. Moreover, she’s confused why he’s obsessed with how she’s doing in school. Stunned, he says he doesn’t hate her. [flashback ends]

Su Yunjin and Mo Yuhua go shopping together. Su Yunjin suspects Cheng Zheng sent her new clothes after knowing she was splashed with wine. Mo Yuhua says Cheng Zheng and Su Yunjin argue when they are together but miss each other when they are apart. Su Yunjin needs to decide if it’s worth it to jump into the “fire hole” again. After all, how many 5 years does a person have in a lifetime?

Meanwhile, Cheng Zheng accompanies Zhou Ziyi to buy new clothes to wear to the wedding. Cheng Zheng isn’t sure he will go.

It’s the day of Song Ming and Meng Xue’s wedding. Su Yunjin and Mo Yuhua arrive together. Su Yunjin looks around to see if Cheng Zheng has arrived.

[flashback] It’s the day parents can tour the school. Su Yunjin is surprised to see her parents show up. Cheng Zheng introduces himself to her parents and takes them to her desk. Cheng Zheng’s mom notices her son’s eagerness and asks Meng Xue, who says Cheng Zheng is nice to Su Yunjin because her grades are bad. Suddenly, Su Yunjin’s father faints, startling everyone.

As rain pours down, medics arrive and take Su Yunjin’s father to a hospital in an ambulance.

Eventually, Su Yunjin’s father regains consciousness. He feels bad because the burden of taking care of the family falls on Su Yunjin, who is still a young girl. She promises to study hard so she will have a good future.

The next day at school, Su Yunjin shocks Cheng Zheng by asking him to tutor her in math. He agrees. However, she has to do something for him. He’ll let her know later when he thinks of something. [flashback ends]

Su Yunjin sits at a table and waits for the wedding to start.