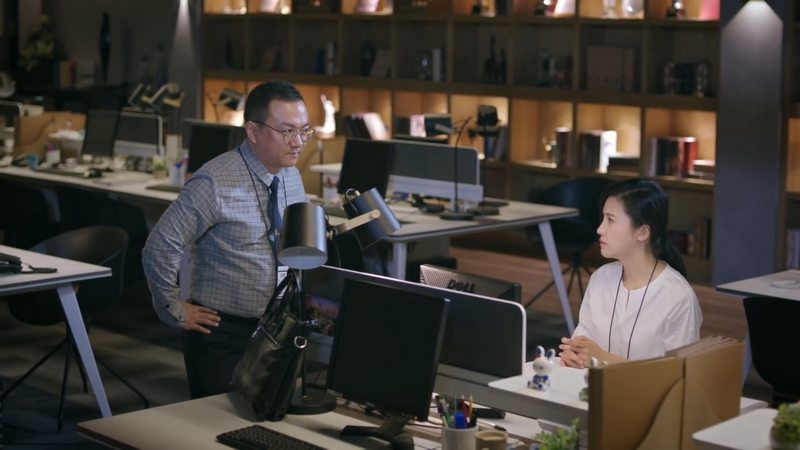 Su Yunjin works overtime to redo the report for Sister Guo. Brother Li says it’s natural for interns to want to show what they are capable of. However, interns are hired to do simple tasks. She only needs to do what she is told to do, nothing more, nothing less.

Cheng Zheng buys bun dumplings for Su Yunjin. Su Yunjin says she’s not hungry, but the growling of her stomach exposes her lie. She is afraid the survey results aren’t reliable, which means the report wouldn’t be accurate. She has a lot of work to do, so he stays and helps her.

After some time, Su Yunjin looks over at Cheng Zheng’s desk. Worn out, he has fallen asleep. She covers him with her jacket and takes back the surveys he hasn’t done.

When Su Yunjin finishes the report, she puts her head on her desk, looks at a sleeping Cheng Zheng and smiles.

Sister Guo reminds everyone in the department about their project. Data collection is critical, and she acknowledges Su Yunjin’s concern regarding the reliability of the survey results. Therefore, they will do the surveys again. Sister Guo gives Su Yunjin one week to finish the report.

Brother Li assigns the employees to different areas to collect data. Understandably, he sends Cheng Zheng and Su Yunjin to the furthest area since it’s their fault the department is doing the surveys again. Brother Li says there will be a team building event in a couple of days. Everyone in the department has to participate.

Cheng Zheng and Su Yunjin go to their area to monitor the data collection process and discover it is being done carelessly. He gets a call from his mother, telling him to go work at Hengkai Company.

Cheng Zheng and Su Yunjin accuse the data collector of doing a bad job. The data collector argues back, and they can’t reason with him. Thus, she decides to make copies of the survey. If she wants something done right, it seems she has to do it herself.

The data collector isn’t happy to see Cheng Zheng and Su Yunjin doing the same task and leaves when the workday is over. Su Yunjin tells Cheng Zheng to go home. Worried for her safety, Cheng Zheng stays and helps her.

Cheng Zheng and Su Yunjin work late into the night, but their progress is slow. The problem is it takes a long time to explain the questions in the survey to people. Moreover, it is raining, so they encounter fewer people. He says he will think of a way to get the surveys filled out, but at this time, she needs to go back to her dorm and sleep.

Cheng Zheng texts Su Yunjin to say goodnight. Su Yunjin replies, wishing him the same thing. Instead of sleeping, he does research on the Internet to find a way to get people to fill out their surveys.

The next morning, Cheng Zheng brings two costumes and meets with Su Yunjin. His idea is for them to act out the contents of the survey so it is easier for people to understand. Their presentation is successful, attracting a large crowd. In no time, they have many people filling out their surveys.

Cheng Zheng and Su Yunjin take a break. An assistant for Zhang Yue’s father walks by and sees Cheng Zheng.

Like yesterday, Cheng Zheng and Su Yunjin work late into the night. He tells her not to worry because he has plenty of ideas to find people to fill out their surveys. Unexpectedly, he gets a text from Zhang Yue’s father, demanding to see him immediately. Cheng Zheng ignores the text.