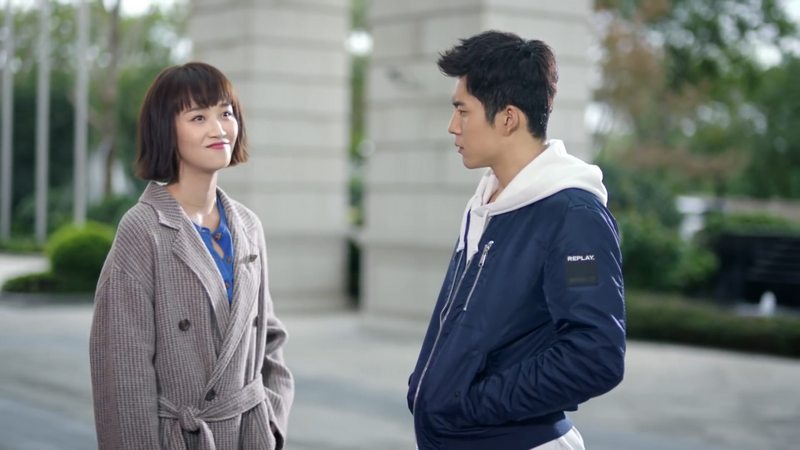 Cheng Zheng’s family and Zhang Yue’s family meet for lunch before going to the architecture competition to support Cheng Zheng. Talking to Cheng Zheng in private, Zhang Yue says her father and his mother plan for him to start working at Hengkai Company in his junior year of college. She also knows something else: Su Yunjin and Shen Ju’an have broken up.

Cheng Zheng looks for Shen Ju’an. Upon finding his target, Cheng Zheng punches Shen Ju’an, calling him a jerk for dumping Su Yunjin. Zhou Ziyi can’t stop the fight, so he calls Su Yunjin. Su Yunjin shows up and tells Cheng Zheng to stop. She says she broke up with Shen Ju’an, not the other way around. Surprised, Cheng Zheng realizes he misunderstood the situation.

Since Cheng Zheng’s mouth is bleeding, Su Yunjin takes him to the school’s doctor.

After an examination, the doctor says Cheng Zheng’s injury is minor. However, Cheng Zheng whines like he is in pain. The doctor admonishes Cheng Zheng to stop pretending like he has a serious injury to get Su Yunjin’s sympathy. Su Yunjin looks at Cheng Zheng. Shamelessly, Cheng Zheng says his injury really hurts.

Cheng Zheng decides to skip the architecture competition since he can’t be there on time. Moreover, he can’t let his father see him in his current condition. Grabbing Cheng Zheng’s arm, Su Yunjin runs with him in tow until she gets a taxi for him. She says he owes it to himself to be at the architecture competition. Also, there’s no need for him to copy anyone to impress her.

The architecture competition ends, and Cheng Zheng is disqualified for not being at the venue to do his presentation. Arriving late, he begs the judges to let him explain his design, even if he won’t win anything. His father won’t allow it, but the other judges persuade his father to give Cheng Zheng a chance.

In his presentation, Cheng Zheng says his design is inspired by the structure of a flower. Additionally, it’s based on the design of an architect he admires greatly (i.e., his father). He admits his lack of experience, but he loves the profession because the buildings he designs can be useful to people. Therefore, he vows to learn all he can so he can become a great architect.

Mo Yuhua doesn’t understand why Su Yunjin broke up with Shen Ju’an. Su Yunjin says people change, and it’s no longer possible between her and Shen Ju’an because they don’t share the same dreams anymore. Mo Yuhua says change can be good. After being stuck on Zhou Ziyi for so long, Mo Yuhua thinks she should move on and give other guys a chance.

Su Yunjin leaves school to return home for the winter break. She sees Cheng Zheng waiting for her at the school’s gate. He offers to drive her to the bus terminal. Silently, she gives her consent by allowing him to put her luggage in the back of his SUV.

Su Yunjin asks about Cheng Zheng’s injury. Cheng Zheng says he is fine, making her smile because she remembers the fuss he put up in the doctor’s office. She asks about the architecture competition. He says he was disqualified but was allowed to do his presentation. He will stay in Shanghai for New Year and hopes she will let him know when she is back.