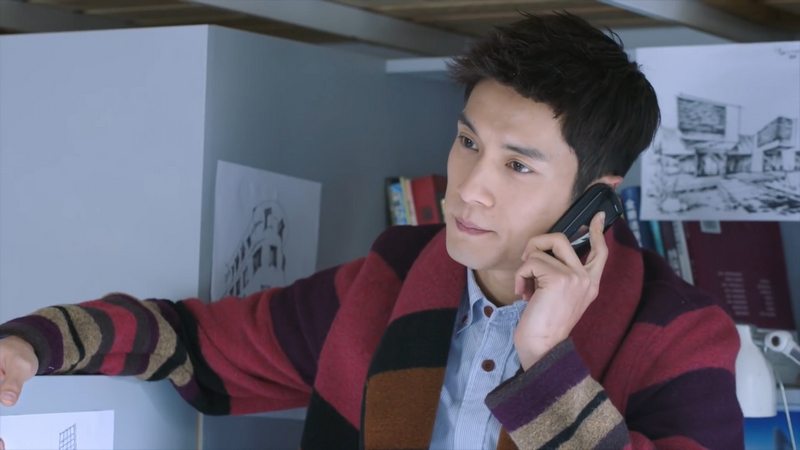 Cheng Zheng uses Zhang Yue’s account to buy a plane ticket to Shanghai. He doesn’t want his parents to know he’s in an architecture competition because his father is one of the judges.

Cheng Zheng’s roommates tease Cheng Zheng for doing well in school even though he hardly studies.

Uncle Ding says he was surprised when Hengkai Company contacted him since he is a small contractor. Then he found out Cheng Zheng’s uncle is the chairman of the company. In all likelihood, Uncle Ding got the job thanks to Cheng Zheng, and now Uncle Ding thinks Cheng Zheng can help them. Su Yunjin says she will find another way to come up with the money.

Su Yunjin gets a call from her roommate. The roommate asks if Su Yunjin still plans to apply for an internship. Su Yunjin says she has changed her mind.

Due to flight delays, Cheng Zheng is stuck at the airport. Unexpectedly, he gets a call from Su Yunjin. Eager to see her as soon as possible, he tries to get on the earliest flight to Shanghai. There is one available seat, but it is in business class. Over the phone, Su Yunjin hears him spend a lot of money without any hesitation. Stunned, she can’t bring herself to ask for his help.

Su Yunjin tells Uncle Ding to go home and rest. She can stay at the hospital and take care of her mother. Rather than relying on Cheng Zheng, she says she will try to borrow money from friends at school.

Su Yunjin sleeps on a cot in her mother’s hospital room. She gets up and checks on her mother to make sure everything is all right.

Su Yunjin asks Mo Yuhua about the precautions that need to be taken after surgery. In addition, Su Yunjin tells Mo Yuhua about Uncle Ding’s embezzlement. Mo Yuhua says they will figure out how to come up with the money together.

Before leaving, Su Yunjin writes down the things her mother need to do and shouldn’t do. She gives the note to Uncle Ding.

Shen Ju’an can only give Su Yunjin a fraction of the 150,000 RMB she needs. She asks if he knows anyone working in construction at Hengkai Company. He says he doesn’t because he works at a branch office, not the headquarters. While they talk, he keeps looking at his watch. She cuts short their meeting, afraid of intruding on his time since he is busy.

Late at night, Su Yunjin’s roommate gets a call from her boyfriend. Su Yunjin can’t sleep and checks her phone. Shen Ju’an hasn’t called at all.

As soon as the plane lands in Shanghai, Cheng Zheng goes looking for Su Yunjin, worried because she didn’t say anything when she called him. Su Yunjin says she already took care of things. He brags about being in the final of an architecture competition. To his disappointment, she is still cold to him, not caring about his achievement.

Zhou Ziyi laughs at Cheng Zheng working hard to win awards like Shen Ju’an. Too bad Su Yunjin isn’t impressed. Cheng Zheng asks Zhou Ziyi about Su Yunjin since she is acting strangely. Zhou Ziyi doesn’t know what’s wrong with her, even though he promised to spy on her for Cheng Zheng.

Su Yunjin and her mother talk on the phone. Her mother says she’s well enough to go home.

Su Yunjin’s roommates pool together their savings. It’s not much, and they give Su Yunjin all they have. She writes them an IOU note even though they don’t need one.

Mo Yuhua borrows from friends and gives the money to Su Yunjin. Su Yunjin says she only has 1/3 of the money she needs.

Cheng Zheng registers to be in the final of the architecture competition. Coincidentally, his father is in the vicinity with the other judges. Cheng Zheng crouches down and hides in a crowd of students to avoid his father.

After registering, Cheng Zheng looks for Zhou Ziyi. Zhou Ziyi gets a call from Mo Yuhua needing to talk to him, so he runs off, leaving Cheng Zheng in confusion.