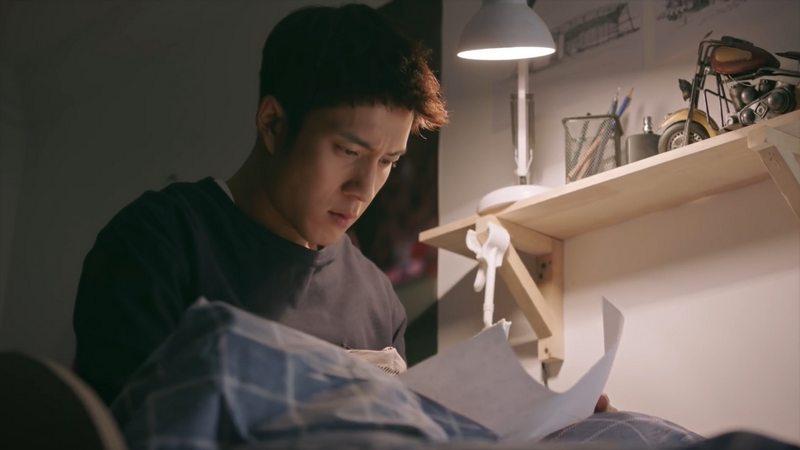 Cheng Zheng works hard on his design for the architecture competition even though Chen Xiaoyu doesn’t think he stands a chance. She says some of the designs submitted are excellent. Besides, the other students have had several months to prepare compared to him, who decides to do it at the last minute.

Unbelievably, Cheng Zheng finishes and turns in his design to Chen Xiaoyu before the deadline.

The flu epidemic is over. Cheng Zheng has disappeared and Shen Ju’an is busy, so Su Yunjin has time to do whatever she wants. Life is serene, and she is happy. If possible, she wants to avoid the chaos caused by Cheng Zheng.

The designs chosen for the architecture competition are announced, and Cheng Zheng makes the cut. However, the selection committee can’t approve his submission due to his lack of experience. Cheng Zheng says the most important thing in architecture is if the design is useful to society. The head of the selection committee agrees and grants an exception.

Cheng Zheng thanks Chen Xiaoyu for helping him. His goal is to be in the final of the architecture competition, which occurs in Shanghai. She says she was right to pursue him. However, she isn’t lucky enough to be the person in his heart who inspires him to work hard.

Su Yunjin calls home. Strangely, neither her mother nor Uncle Ding answers even though it’s late at night.

Su Yunjin and Shen Ju’an agree to meet at a dining spot near the school.

Zhou Ziyi doesn’t clean his locker, so his coach orders his teammates to do it. Su Yunjin and Mo Yuhua see the medicine from Mo Yuhua on top of a pile of trash.

Zhou Ziyi tells Su Yunjin that Cheng Zheng will be in Shanghai for an architecture competition. Su Yunjin berates Zhou Ziyi for hurting Mo Yuhua. If he doesn’t like Mo Yuhua, he should be honest with her instead of giving conflicting signals.

Finally, Su Yunjin hears from her mother. Her mother lies about having to use Uncle Ding’s phone because their home phone is broken. Suddenly, Su Yunjin hears a nurse talking in the background. Sensing something isn’t right, Su Yunjin buys a bus ticket so she can go home.

Upon arriving, Su Yunjin finds the front door locked, and she doesn’t see her mother or Uncle Ding. Talking to a neighbor, she learns that her mother is in the hospital.

Su Yunjin hurries to the hospital. Her mother is recuperating from an operation and will be fine.

Su Yunjin’s mother became ill unexpectedly, so Uncle Ding embezzles money from work to pay the hospital bills. Currently, he is involved in a construction project headed by Hengkai Company. He hopes Su Yunjin can persuade the people at Hengkai Company to postpone checking the books. He can borrow money to make up the deficit, but he needs time.