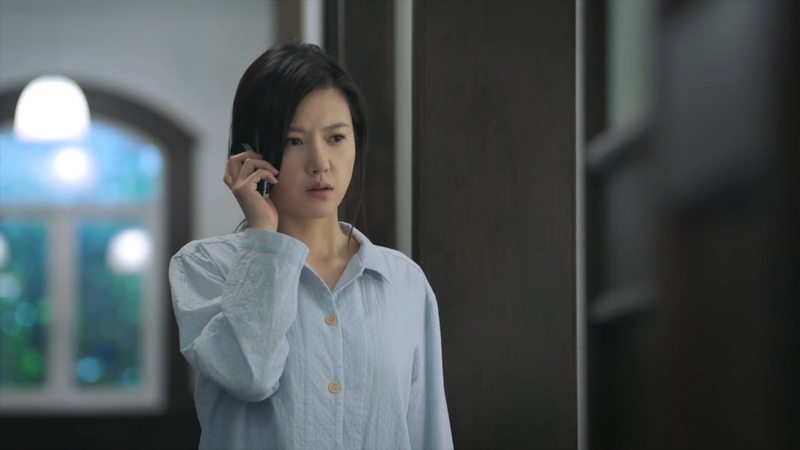 Su Yunjin gets a call. It’s Mo Yuhua, and she thinks Su Yunjin should talk to Cheng Zheng. Su Yunjin doesn’t want to do that, knowing how unreasonable he can be, so she tells Mo Yuhua to text him for her. Thus, Cheng Zheng gets a message in which Su Yunjin says she trusts Shen Ju’an. As for Cheng Zheng, he should go back to Beijing.

Zhang Yue takes Cheng Zheng to the airport. If he continues to skip school and cause trouble, she threatens to tell his parents. She says she’s doing him a favor if she takes Shen Ju’an away from Su Yunjin. Worried for her, he says he doesn’t want to win that way.

Mo Yuhua is working with paramedics. She gives Su Yunjin two bags of medicine, one for Su Yunjin and the other for Zhou Ziyi.

Cheng Zheng calls Su Yunjin. He says it’s dangerous to stay in a crowded place and has come to take her away. She ignores him and unplugs the phone. Undeterred, he calls another room in her dorm and asks someone there to talk to her for him. If Su Yunjin won’t go see him, he will call all the rooms in her dorm.

Su Yunjin asks a professor for permission to leave the campus. She has to lie about needing to buy sanitary pads.

As soon as Su Yunjin walks out of the school, Cheng Zheng drags her into his car and drives off. She yells at him to stop the car, but he refuses to do so.

Arriving at a house, Cheng Zheng carries Su Yunjin inside and forbids her from leaving until the flu epidemic is over. Using her phone to call his phone, he finally has her phone number.

Calling her roommate, Su Yunjin says she will be back tomorrow. The roommate thinks Su Yunjin is with Shen Ju’an.

Cheng Zheng tells Su Yunjin to come out of her room and eat dinner. She says if he won’t let her go, she will call the police. Surprisingly, he doesn’t argue with her and goes to his room without eating. She texts him, letting him know she’s left food for him in the microwave.

The next morning, Su Yunjin hears Cheng Zheng coughing and vomiting in the bathroom. He has a fever, so she wants to call an ambulance. Giving her his phone, he tells her to call Zhang Yue to bring him medicine. He was in a hurry to fly back to Shanghai in the cold weather and didn’t eat anything. As a result, he has a stomach bug, not the flu.

Zhang Yue drops by with medicine. Since schools are closed because of the flu epidemic, she wants Cheng Zheng to return home. Su Yunjin also tells him the same thing. He says his stomach hurts, forcing Su Yunjin to stay and take care of him.

Cheng Zheng guesses Shen Ju’an bought a phone for Su Yunjin. Seeing that Cheng Zheng is doing better, Su Yunjin wants to leave. She can take the bus, but he insists on driving her back to school.

Upon arriving, Cheng Zheng and Su Yunjin see Shen Ju’an. Cheng Zheng says he will explain why they’re together, but she says there’s no need. Not hiding anything, she tells Shen Ju’an what happened. Shen Ju’an is glad she’s all right and doesn’t ask any questions. Jealous because she always defends Shen Ju’an, Cheng Zheng wants to talk to his rival in private.