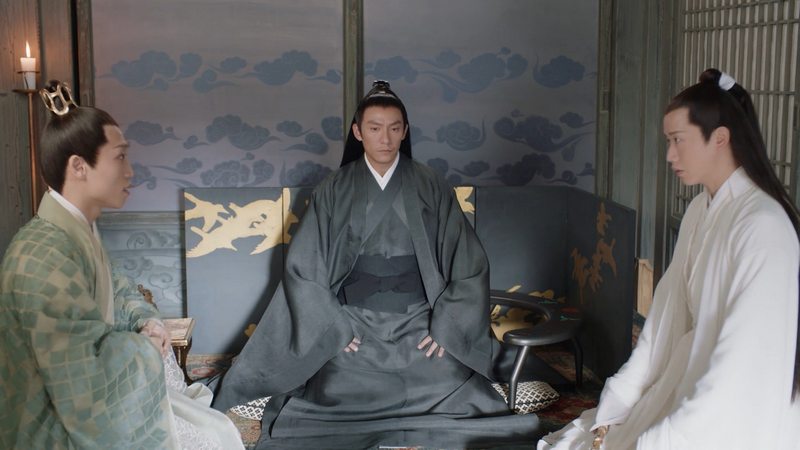 Yun Feng couldn’t go into Mount Youdu because of the demonic energy in the mountain, but Zhong Hao was able to do it. Jiu Chen says the Demon King has awakened but is extremely weak, as if without his power. Jiu Chen doesn’t think Ling Xi has the Demon King’s power. Si Ming is surprised someone smart, kind and cheerful like Ling Xi is caught up in this.

Ling Xi succeeds in making pills. Hua Yan worries the pills could be poisonous since Ling Xi has never done this before. Ling Xi remembers Shi San talking about the Wangyue Stream. Shi San says a little immortal fell into the frigid stream and almost died. After that, the little immortal has a cold illness like Jiu Chen.

In the middle of the night, Ling Xi sneaks outside. Jiu Chen is aware of her movement.

At the Wangyue Stream, the water is so cold Ling Xi can’t even put her foot in. She eats her pill and takes off her outer clothes. Jiu Chen, following her, looks away and hears a splash. He pulls her out of the stream, carrying her back to shore.

Ling Xi is excited because her pills work. From now on, she can make pills for Jiu Chen, and they don’t need to depend on the Medicine Department. At this point, Jiu Chen understands what she has been doing.

Ling Xi asks Jiu Chen not to walk so fast. Jiu Chen stops and waits for her to catch up.

Not just for Jiu Chen, Ling Xi offers to make all types of pills for Shi San and Hua Yan. Shi San isn’t so sure, so Ling Xi shows Shi San her medicine book.

Yun Feng flips through Ling Xi’s medicine book and sees a flower he helped Qing Yao obtain. Ling Xi says the flower, which is hard to find, is the main ingredient of a remedy for the cold illness.

Ling Xi tells Jiu Chen that Qing Yao made new pills for him. Jiu Chen doesn’t mind taking pills made by Ling Xi if they are equally effective.

Looking at a pill made by Ling Xi, Jiu Chen is shocked by its abnormally large size. Ling Xi gives him a knife and chopsticks to make eating the pill easier.

Like always, Ling Xi’s dog makes a mess in her room. Ling Xi chastises it lovingly.

While making more pills, Ling Xi senses something is wrong.

Ling Xi searches for her dog. When she finds it, it’s already dead.

Ling Xi carries her dog to Xixian Pond. According to Shi San, immortals who commit crimes are thrown into the pond, which destroys their immortal power and takes them to the Mortal Realm. Broken-hearted, Ling Xi puts her dog into the pond so that it can return to the realm it came from.

Inside her room, Ling Xi hears Shi San and Hua Yan calling for her dog.

Jiu Chen worries about Ling Xi, who hasn’t stepped out of her room for several days.

In three days, Jiu Chen has to attend a trial to explain why he destroyed Zhu Xie’s war report.

Ling Xi can’t sleep because of Jiu Chen’s upcoming trial and what Si Ming said about Gongde Hall. She remembers how she was able to save the ashes of Zhu Xie’s burned war report when Shi San changed the brazier.

Ling Xi lands in a cave.