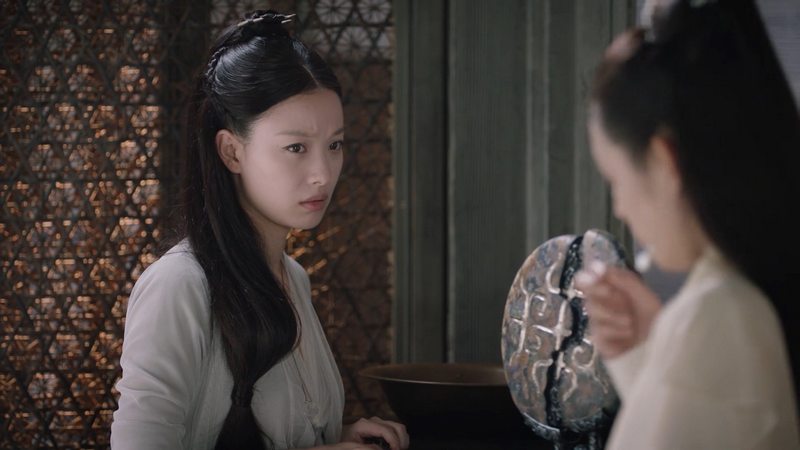 Ling Xi sees a totem while cleaning, so she asks Shi San. Shi San says the totem belonged to Lie Yi, a general under Jiu Chen. Lie Yi turned demonic, so Jiu Chen killed him. The Heavenly Emperor destroyed the immortal power of Lie Yi’s family members and banished them to the Mountain Spirit Realm.

Jing Xiu looks at the longevity knot dropped by Ling Xi, remembering meeting her in the Heaven Realm.

Jiu Chen tells Yuan Tong to deliver a letter to Ling Yue for him. In the letter, Jiu Chen asks Ling Yue to spare Lie Yi’s descendants. If caught, Lie Yi’s son Zhong Hao will be killed for attempting to assassinate Jing Xiu. However, the rest of Lie Yi’s descendants are innocent and shouldn’t have to die for Zhong Hao’s crime.

Sand flows out of the totem. Then the totem breaks into pieces. A small mark appears behind Ling Xi’s ear, and she faints. The pendant on Ling Xi’s necklace glows, alerting her father.

Shi San panics when she realizes Ling Xi has fainted.

When Ling Xi regains consciousness, she sees her father and Qing Yao. Ling Xi doesn’t know what happened to cause the totem to break into pieces.

Looking at the broken totem, Jiu Chen worries Lie Yi’s descendants must have made a blood oath.

Ling Xi’s father says he misses Ling Xi and forces her to come home with him. Jiu Chen leaves the decision of what to do up to Ling Xi. Ling Xi says she likes being Jiu Chen’s maid and refuses to return to Peach Forest.

Yuan Tong reports what happened in the Mountain Spirit Realm to Jiu Chen. Lie Yi’s descendants thought they would be killed. As a result, they swore a blood oath and sacrificed themselves to awaken the Demon King.

Thunder Lord gives the God of War’s seal back to Jiu Chen and asks Jiu Chen to use the seal to open Zhu Xie’s last war report, written by Zhu Xie before he died in the final battle at Mount Youdu. Jiu Chen unlocks the container holding the war report, but instead of revealing the content, he throws the war report into a brazier, burning it.