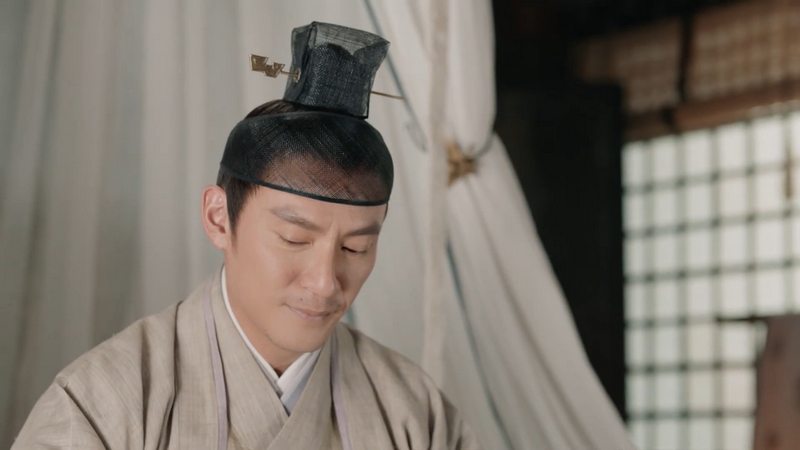 Jiu Chen thanks Ling Xi for helping him and praises her quick thinking during the banquet. Ling Xi complains about the factions in the Heaven Realm and wishes she could beat up Thunder Lord and Old Madame Yuan, making Jiu Chen smile for the first time while in her presence.

Shi San heard what happened at the banquet. Together with Ling Xi, they regret not being powerful enough to help Jiu Chen.

Ling Xi realizes the accusations against Jiu Chen at the banquet match what she saw in her dreams.

Jiu Chen can’t forget he had to kill a demonic Yuan Zheng in the final battle at Mount Youdu.

Ling Xi tries to make a longevity knot for Jiu Chen, but it doesn’t look right. Hua Yan had lived in the Mortal Realm and knows how to make knots, so she helps Ling Xi.

Shi San notices the depletion of household items. Hua Yan says she and the other maids have gone to various departments repeatedly, but they can’t get anything because of the rumors about Jiu Chen. Ling Xi offers to go get what they need, and Shi San follows her example.

Like the maids, Ling Xi can’t get anything either.

Ling Xi saves a dog that’s about to become food for ancient beasts. The dog is from the Mortal Realm and was brought to the Heaven Realm by accident.

Shi San thinks the dog is useless and jokes about eating it. Ling Xi tells Shi San to stay away from her dog, which she calls Xiao Bai.

In the middle of the night, Ling Xi’s dog wiggles out of its leash and runs out of the room while Ling Xi and Shi San are sleeping.

Jiu Chen walks out of his room, looking grumpy and holding Ling Xi’s dog. Jiu Chen allows Ling Xi to keep it, but she has to be responsible for it. Ling Xi tells Jiu Chen she doesn’t believe the rumors about him.

As punishment, Jiu Chen orders Ling Xi to clean the residence every day for one month, and she can’t use her power. Ling Xi tries to pass off her handmade longevity knot as the one she took from him, but he knows it’s fake, so she has to confess she lost it.

Ling Xi doesn’t have the heart to scold her dog and kisses its face instead.

Just as Ling Xi finishes cleaning one room, her dog makes a mess in the next room.