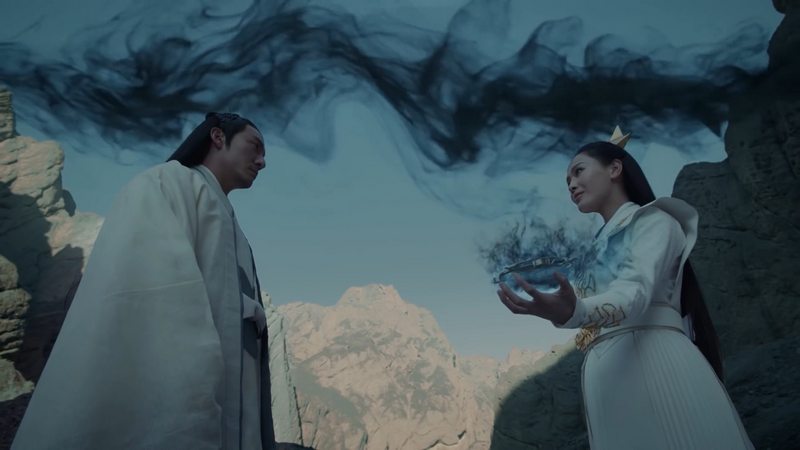 Yuan Tong destroys the war report. Only Ling Xi can repair it, so without her, Jiu Chen can’t find out what happened at Mount Youdu. Yuan Tong says she did everything to make him love her, but he loves Ling Xi to the extent of protecting her family and friends. Yun Feng sees Yuan Tong’s war report in pieces.

Jiu Chen tells Yun Feng to wait for Ling Xi to return so that she can repair the war report. However, it doesn’t matter what Yuan Tong had done if Qing Yao tampered with the pills.

A’Mo asks Jing Xiu about Jiu Chen and Ling Xi. Jing Xiu says the Heaven Tribe decided to execute Ling Xi, fearing she was colluding with the Demon Tribe to release the Demon King. Jiu Chen pretended to kill her but preserved her soul to create A’Mo. If A’Mo passes the trial in the Mortal Realm, Ling Xi will be reborn when A’Mo dies. Jing Xiu promises to protect A’Mo because he cares about her, not Ling Xi.

To save Qing Yao, Yun Feng takes responsibility for what happened to Yuan Tong’s soldiers at Mount Youdu. As a result, he is sealed in stone for 1,000 years and struck by lightning twice every day. Qing Yao begs Jiu Chen to save Yun Feng, but Jiu Chen says it isn’t possible to reverse a decree by the Heavenly Emperor.

Jiu Chen looks at Yun Feng’s statue. He had told Yun Feng not to act hastily.