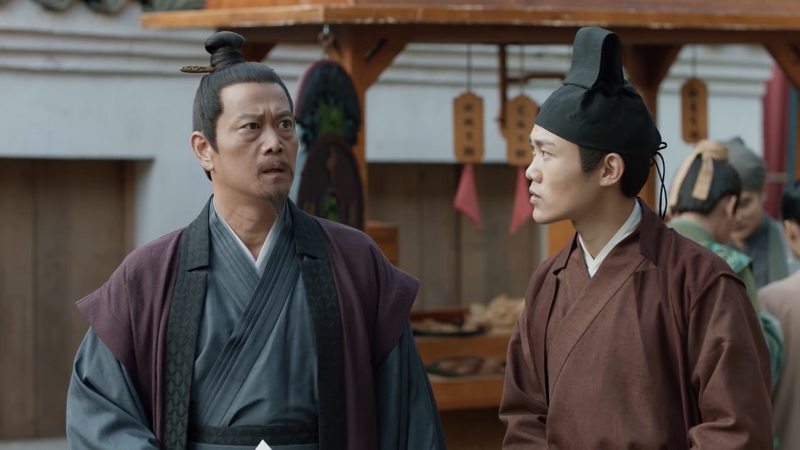 A’Mo asks Immortal Peng why he is standing outside her house. Immortal Peng says he is waiting for Jiu Chen’s permission to talk to him.

The Song family’s housekeeper scolds A’Mo for running away from home and living with a man. Confused and shocked, A’Mo finds out Jiu Chen isn’t her betrothed.

Jiu Chen says he has loved A’Mo for a long time. Thus, he pretends to be her betrothed to stay with her and protect her. A’Mo asks about his background, so he kisses her to stop her from talking.

A’Mo asks Jiu Chen about his background again, thinking he is joking when he says he is a god. Jiu Chen can’t answer her, so he makes her fall asleep.

Immortal Peng apologizes if he unknowingly offended Jiu Chen. Jiu Chen tells Immortal Peng to create an identity for him, someone who is wealthy because Madam Guan had asked if he can take care of A’Mo.

The next morning, A’Mo wakes up, not remembering how she had fallen asleep.

Jiu Chen shows A’Mo documents about his background: his parents are dead, he has a brother, he was in the military, his business is in tea and salt, and lastly, he has a lot of properties. He hides documents stating he has concubines before A’Mo sees them.

A’Mo thinks about her grandmother when she sees a grandmother accompanied by her granddaughter at Physician Sun’s pharmacy. According to the Song family’s housekeeper, A’Mo’s grandmother fell ill after A’Mo ran away from home.

A’Mo gives the grandmother and granddaughter their medicinal herbs.

A’Mo says she wants to visit her family. Immediately, Jiu Chen agrees to go with her.

Arriving at the Lin family’s residence, A’Mo hesitates, so Jiu Chen knocks on the door. Seeing A’Mo, a maid alerts the household.

Madam Lin cries, glad to see A’Mo again. The Song family’s housekeeper had written to the Lin family, saying A’Mo is no longer mute and deaf. Lin Zhan mocks A’Mo for coming back. Lin Shaohai’s concubine tells Jiu Chen to wait for Lin Shaohai, who will be home soon.