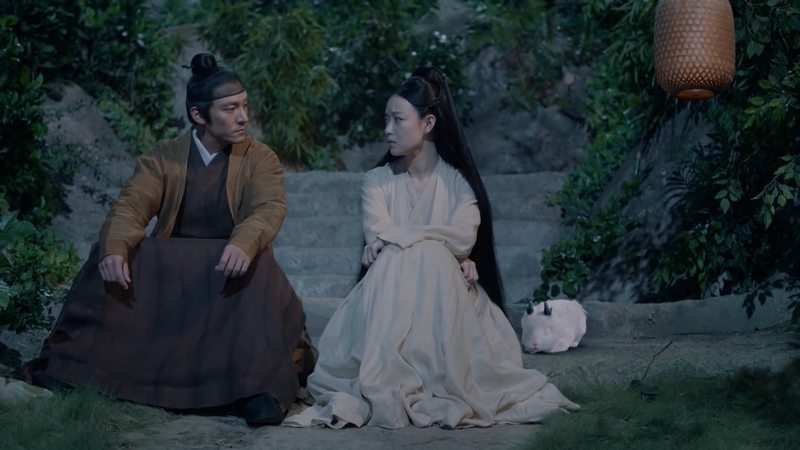 A’Mo tells Jiu Chen to go back to his family.

Jiu Chen catches A’Mo trying to start a fire to thaw Xu Hai and Xu Hai’s underling. A’Mo says the elites in town have hired a Taoist priest, and she fears what he can do to Jiu Chen.

A’Mo decides not to disturb Jiu Chen while he is in his room. Jiu Chen doesn’t know why A’Mo stands outside his room for a while and then leaves.

Jiu Chen asks A’Mo if she needs to talk to him.

A’Mo gives Jiu Chen the clothes she made for him.

Jiu Chen tries on the clothes. A’Mo says it’s beautiful, and then tells him she means his clothes, not him.

A’Mo tells Jiu Chen about her plan to raise chickens and sell chicken eggs for money. A’Mo’s excitement makes Jiu Chen smile until he remembers his conversation with Qing Yao. Can he watch A’Mo suffer and not intervene in her trial?

Madam Guan tells A’Mo that Xu Hai and his underling have been unfrozen, and surprisingly, the men are alive after being encased in ice for so long.

A vendor tries to sell a hairpin to A’Mo. Jiu Chen asks why A’Mo doesn’t buy it when she likes it. A’Mo says she would rather buy things that can be eaten such as chicken eggs, chicken legs and chicken breasts.

Hearing A’Mo talk about her birthday startles Jiu Chen because he knows she isn’t fated to live past this date. A’Mo tells Jiu Chen to cook longevity noodles instead of buying a gift for her because she wants to save money to buy chickens.

Jiu Chen persuades A’Mo to take Jing Xiu’s plant out of her room to let it bask in the sun.

A’Mo wants to become a physician because she can make money while helping people. Jiu Chen says if fate disrupts her plan, she mustn’t let her anger corrupt her, and no matter what, he will risk his life to protect her.

Disturbed by what has happened lately, Madam Guan gets paintings of Earth Deity from a temple for herself and A’Mo. A’Mo doesn’t want to but has to accept it because of Madam Guan’s insistence.

Jiu Chen sees a painting of Earth Deity hanging on a wall in A’Mo’s house.

Immortal Peng, Earth Deity of where A’Mo lives, chats with Si Ming and suddenly gets chills all over his body.

Standing before the painting of Earth Deity, A’Mo bows with incense sticks and then tells Jiu Chen to do the same. Stunned, Jiu Chen looks at A’Mo, unable to say he outranks Earth Deities.

Jiu Chen’s bowing causes Immortal Peng to vomit blood. The painting of Earth Deity falls off the wall, so Jiu Chen tells A’Mo not to hang it up again.