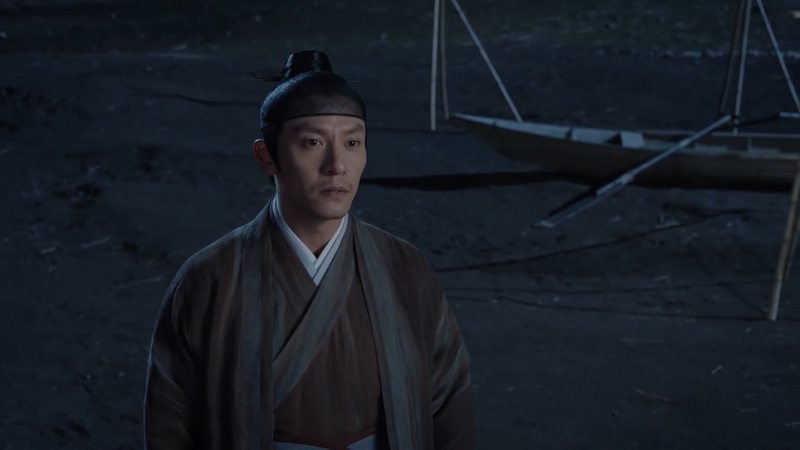 [Flashback: Qing Yao asks why Jiu Chen risks his life to help Ling Xi when trials happen to all immortals. In Qing Yao’s trial, she fell in love with a mortal, but Yun Feng accidentally killed him. Jiu Chen says his sacrifice is worth it if Ling Xi returns to the Heaven Realm with hope instead of heartbreak.]

A’Mo worries because she can’t find Jiu Chen. Jiu Chen says he stepped out for a while, and since she hasn’t eaten dinner, he will make noodles for her.

Jiu Chen struggles to make noodles for the first time and ends up with flour all over himself.

A’Mo eats the noodles while trying hard not to laugh at Jiu Chen.

A’Mo asks if people who cultivate like Jiu Chen can marry and need to eat. Jiu Chen says he eats, influenced by a friend who said life is boring without food.

Remembering Si Ming’s warning not to intervene, Jiu Chen worries if Ling Xi can pass the hardships in her trial.

The next morning, A’Mo sees Jiu Chen waiting for her. Jiu Chen says he wants to take her to work.

Arriving at Physician Sun’s pharmacy, Jiu Chen and A’Mo say goodbye to each other.

A’Mo continues to look even after Jiu Chen walks away. Teasing A’Mo, Madam Guan tells her to ask for time off if she prefers to be with Jiu Chen instead of working.

Jiu Chen sees a couple discussing a talisman they bought.

Jiu Chen tells Zhu Zizai to stop deceiving people by selling talismans. Since Jiu Chen is busy, he gives Zhu Zizai a letter, introducing him to another teacher, Master Qingsong at Mount Ziyan. Zhu Zizai asks for Jiu Chen’s name so that he can look for him later.

A’Mo listens as Physician Sun and Madam Guan discuss what has happened to Xu Hai. Government officials couldn’t break the ice even though the weather is extremely hot. As a result, people suspect the gods are punishing Xu Hai for his sins.

Madam Guan asks A’Mo if she saw what happened to Xu Hai. A’Mo says she doesn’t know anything.

Looking at Xu Hai and his underling encased in ice, A’Mo is horrified.

Jiu Chen asks A’Mo if something is wrong, but A’Mo keeps her thoughts to herself.

Physician Sun prescribes medicine for a patient with a cold. However, the patient asks if his illness is caused by a demon.

Madam Guan says the elites in town invited a Taoist priest to perform an exorcism to force demons to reveal themselves. Furthermore, Madam Guan gives A’Mo a bottle of wine that supposedly wards off demons.

Seeing talismans everywhere in town, A’Mo rips off as many as she can.

A’Mo secretly burns the talismans. Jiu Chen touches the wine that wards off demons and a talisman. Immediately, A’Mo forces him to wash his hands.