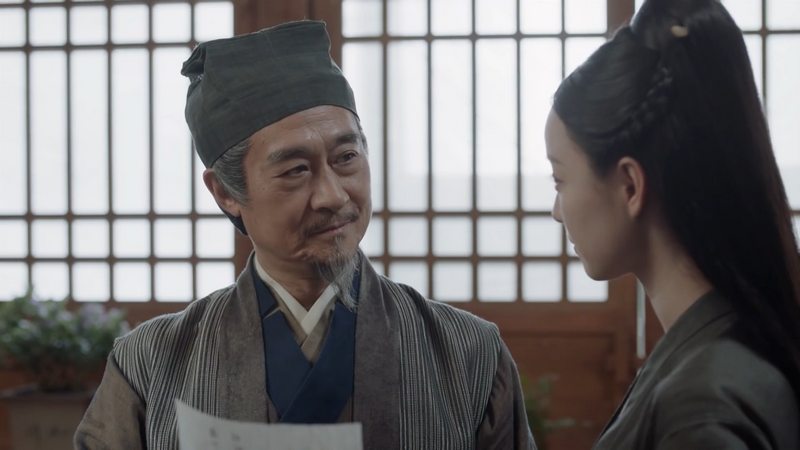 A’Mo prescribes medicine for a patient. She explains the herbs in the medicine to Physician Sun, who praises her. Madam Guan says A’Mo works hard, unlike Physician Sun’s other assistant.

Relying on the Fire Essense to prolong his life, Jiu Chen knows he can’t use his power anymore, at least until Ling Xi passes her hardships.

A’Mo arrives home, so Jiu Chen asks what is in her basket. A’Mo doesn’t tell him she bought fabrics to make his clothes.

As A’Mo sews clothes for Jiu Chen, she remembers using her hands to measure his body.

Jiu Chen asks A’Mo what she has been doing in her room lately to cause her to go to bed late at night. A’Mo says it’s nothing.

Zhu Zizai and Bao Suozhu buy breakfast for A’Mo and offer to take her to work, but A’Mo declines their offer.

In A’Mo’s room, Jiu Chen finds the clothes she is making for him and avoids the plant Jing Xiu left for A’Mo.

Xu Hai, a thug, seeks treatment for his wounds at Physician Sun’s pharmacy, and upon seeing A’Mo, he teases her inappropriately. Physician Sun gives Xu Hai medicine and tells him to go away.

After work, Madam Guan gives A’Mo a package of herbs to soothe her nerves after the incident with Xu Hai. A’Mo says she isn’t afraid.

Bao Suozhu finds A’Mo’s package of herbs and mooncakes, which she dropped while being kidnapped.

After talking with Bao Suozhu, Zhu Zizai guesses something must have happened to A’Mo and alerts Jiu Chen. Jiu Chen disappears in a flash to look for her.

Xu Hai can’t wait to sell A’Mo to a brothel, betting he can get a lot of money because she is beautiful. A’Mo screams for help.

Filled with rage, Jiu Chen freezes Xu Hai and his underling, encasing them in ice. A’Mo sees what Jiu Chen is capable of and faints in shock.

A’Mo asks Jiu Chen if he is human. Jiu Chen says he has never harmed her and apologizes for not taking better care of her. It’s Mid-Autumn Festival and he didn’t have time to prepare a gift, so Jiu Chen wishes her to be safe and happy. Then to her surprise, he kisses her.

Jiu Chen feels unwell because he used his power to freeze two mortals.

Qing Yao gives Jiu Chen medicine, but the medicine might not help because he doesn’t have a heart. Qing Yao says the counter-effect of Jiu Chen using his power against mortals can extinguish the Fire Essence. Jiu Chen tells Qing Yao to visit Ling Xi, but Qing Yao can’t bear to see Ling Xi suffer and not being able to help her.

Jiu Chen asks Yun Feng about the Mountain Spirit Tribe. Yun Feng says spies have infiltrated but have low ranks, so it takes them time to send messages.