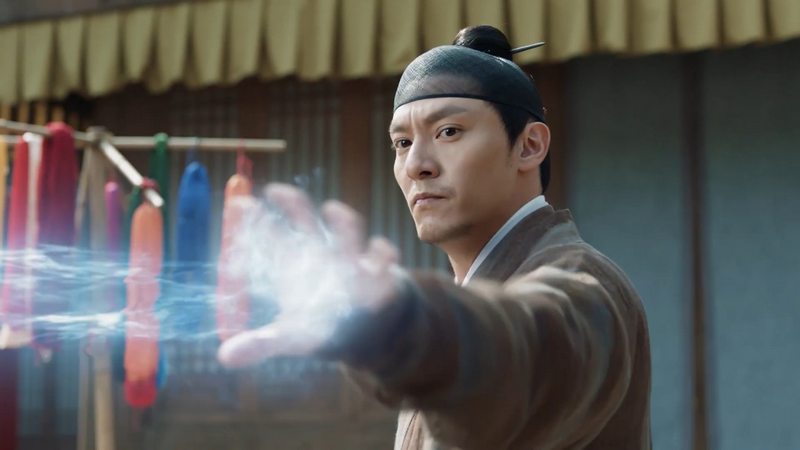 There are many injured people in Physician Sun’s pharmacy. A’Mo calls Jing Xiu to help her get supplies, but he has disappeared.

Zhu Zizai and Bao Suozhu want to visit Jiu Chen, so A’Mo takes them to see him.

Jiu Chen is annoyed he has a disciple like Zhu Zizai. A’Mo doesn’t know why Jiu Chen dislikes Zhu Zizai.

A’Mo discovers a letter from Jing Xiu, saying he needs to return to his family to deal with an emergency. Happy to find his opponent gone, Jiu Chen tells A’Mo not to worry since her relationship with Jing Xiu is likely ill-fated.

Jiu Chen’s spirit leaves his body to return to the Heaven Realm.

According to Yun Feng, Ling Yue said she has imprisoned Jing Xiu. Jiu Chen needs Yun Feng to look into this matter again because Jing Xiu isn’t in prison but instead was staying with A’Mo.

A’Mo finds Jiu Chen sitting in his room, unmoving and not responding to her.

From what Jiu Chen heard from A’Mo, Jing Xiu was severely injured when he met A’Mo. Yun Feng is afraid the relationship between the Heaven Tribe and Mountain Spirit Tribe will become more strained if he investigates Jing Xiu, so Jiu Chen decides to let Han Zhang secretly handle this.

Jiu Chen’s spirit returns to his body, and he tells A’Mo he was sleeping while sitting. A’Mo says she wanted to check on him before going to work. Jiu Chen coughs and pretends to be sick, so A’Mo decides to stay home to take care of him.

A’Mo washes Jiu Chen’s clothes and brews medicine for him. She sees a rip in his clothes.

A’Mo wants to make an outfit for Jiu Chen, but she can’t find the tape measure. Jiu Chen remembers Yun Feng’s advice to be shameless when wooing A’Mo, so he tells her to measure his body with her hands. Flustered, A’Mo follows his suggestion, but she forgets the measurements. Jiu Chen tells her to do it again.