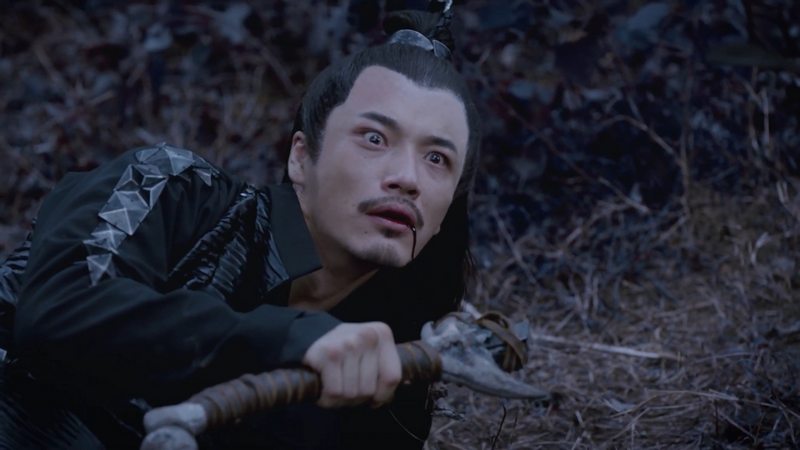 Chi Bi, Jing Xiu’s subordinate, carries out Jing Xiu’s plan and tricks Zhong Hao, whose clan was banished from the Heaven Realm to the Mountain Spirit Realm, into killing Kai Yang. Jiu Chen arrives in time and saves Kai Yang. Zhong Hao escapes with the help of his followers.

Ling Xi gives a cup of medicine to Jiu Chen, and the cup freezes at the touch of his hand. Shi San says Jing Xiu is waiting outside the residence. Jiu Chen decides not to meet, and instead, he gives a box to Shi San to give to Jing Xiu.

While meditating, ice forms all over Jiu Chen and spreads to the area around him. Ling Xi puts Wujin Wood closer to Jiu Chen and watches him carefully, relieved to see the ice thawing.

The next morning, Ling Xi is glad to see Jiu Chen doing better. Jiu Chen reminds her she has 1 day left to give the longevity knot back to him.

Ling Xi searches her room, but she can’t find the longevity knot. Shi San is surprised because Ling Xi looks at it every day.

Jiu Chen, Si Ming, Kai Yang, and Han Zhang discuss Jing Xiu and Zhong Hao. Many years ago, Jing Xiu’s clan rebelled against Yuan Du, the king of the Mountain Spirit Realm. Jing Xiu survived by testifying against his father and promising to serve Yuan Du’s clan forever. After Yuan Du died, his daughter, Ling Yue, became State Master, and Jing Xiu has worked as her adviser ever since. Zhong Hao is impulsive and arrogant, so he and Jing Xiu have become enemies.

Yun Feng says Thunder Lord asked the Heavenly Emperor for permission to organize a banquet for Jiu Chen. Clearly a trap, Jiu Chen knows he still has to attend.

Hua Yan gossips about the banquet. Certainly, Jiu Chen’s fans will be there, including Yu Li, Medicine King’s daughter. Shi San tells Ling Xi to take medicine to Jiu Chen, who already left for the banquet.

When Ling Xi gets to the banquet, she is mistaken for a guest and ushered inside, arranged to sit next to Yu Li.

Ling Xi thinks it’s better for Jiu Chen if she pretends not to know him. Yu Li warns Ling Xi not to fall in love with Jiu Chen because he is beyond their reach.

Zi Guang, Thunder Lord’s subordinate, brings up the final battle at Mount Youdu to embarrass Jiu Chen. Yun Feng reminds everyone about a drunk incident involving Zi Guang, and as a result, all the soldiers under Zi Guang’s command died. Si Ming diffuses the situation by starting an argument with Immortal Peng.

The fighting between the factions in the Heaven Realm shocks Ling Xi. On the other hand, Yu Li praises Jiu Chen even though he hasn’t said anything.

Worried because Jiu Chen is drinking wine, Ling Xi sneaks to his side to give him his medicine. Jiu Chen ignores her.

Thunder Lord says he found Yuan Zheng’s weapon at Mount Youdu, and he gives it to Old Madame Yuan and Yuan Tong. Suddenly, the weapon flies up into the air. Jiu Chen steps in front of the Heavenly Emperor to protect him while Ling Xi hurries to stand in front of Jiu Chen.

The weapon comes down straight at Jiu Chen, and he is able to grab it. Only Ling Xi is close enough to see that Jiu Chen’s hand has frozen, so she secretly uses her power to thaw it.

Since Yuan Zheng’s weapon attacked Jiu Chen, Thunder Lord accuses Jiu Chen of killing all the soldiers from the Heaven Realm, including Yuan Zheng, in the final battle at Mount Youdu. Old Madame Yuan pressures Jiu Chen to explain how he could have survived and everyone else died, their bodies and souls obliterated.

Jiu Chen repeats what he has been saying ever since his return, which is everyone under his command died fighting against the Demon King. Jiu Chen takes Ling Xi’s hand, and they leave the banquet together.