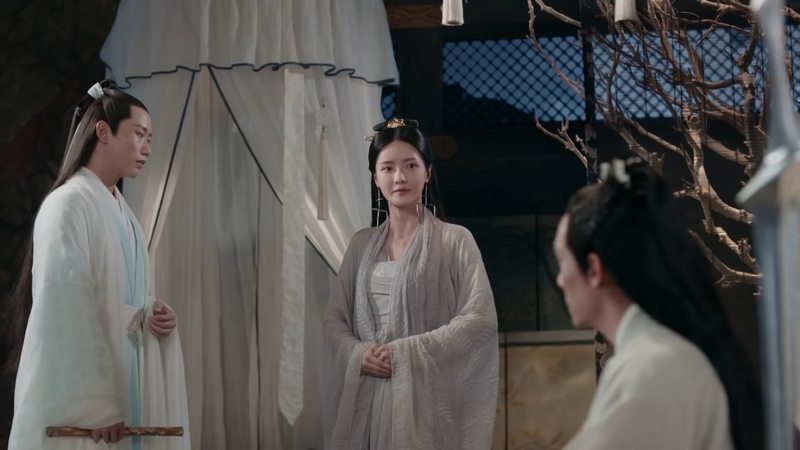 Qing Yao says the cold in Jiu Chen’s body affected Ling Xi. For now, Ling Xi is unconscious, but she will be fine.

According to Qing Yao, Wujin Wood, which burns forever, can alleviate the cold in Jiu Chen’s body, but the wood is in a cave guarded by the ancient bird Bifang and fire crows. Yun Feng says he will get the wood.

Ling Xi tosses and turns in bed, mumbling about feeling cold. Jiu Chen covers her with a blanket.

When Ling Xi wakes up, she realizes she slept in her idol’s bed!!!

Shi San and the maids see Ling Xi walking out of Jiu Chen’s room. Innocently, Ling Xi says she slept in his room, but she doesn’t clarify further because she can’t tell them about Jiu Chen’s illness.

Suddenly, a lot of immortals and gods send Ling Xi gifts. Shi San guesses they must like Ling Xi. Ling Xi doesn’t see how that’s possible when she doesn’t know them.

Han Zhang and Kai Yang praise Ling Xi’s beauty and give her gifts. Ling Xi is scared to accept their gifts because she hasn’t done anything for them, but they insist.

Jiu Chen praises Yuan Tong for doing a good job ever since she took over Yuan Zheng’s position. Yuan Tong congratulates Jiu Chen on his relationship. The rumor of Ling Xi sleeping in Jiu Chen’s room had spread like wildfire.

Jiu Chen is angry at Ling Xi for starting the rumor. Ling Xi doesn’t think what she said is a big deal. Her father let her sleep in Cheng Yan’s room when she lived at Peach Forest.

After obtaining Wujin Wood from Yun Feng, Qing Yao burns it in Jiu Chen’s room. Someone has to watch the fire to make sure it doesn’t burn out of control, and the task falls to Ling Xi because she can withstand the intense heat.

Ling Xi is excited because she has an excuse to stay in Jiu Chen’s room. Rambling nonstop to Jiu Chen, she promises to do her best to watch the fire. Yun Feng notices Ling Xi is very happy.

Yun Feng’s opinion about Ling Xi has changed for the better. Jiu Chen can’t detect demonic energy from her, but some things are still strange: Tuntian Beast’s closeness to her and her father’s demeanor like he is hiding something.

Jiu Chen travels to Peach Forest to look into Ling Xi’s background. Ling Xi’s father has created a barrier, preventing anyone and everything from entering or leaving Peach Forest.

Ling Xi’s father says he is strict to prevent Ling Xi from being seduced by a scoundrel. He worries because Ling Xi is the result of a one-night stand and doesn’t know her mother. Jiu Chen notices Ling Xi’s father spends a lot of effort to keep Ling Xi at Peach Forest.

Passing by a gate, Ling Xi sees Jing Xiu from the Mountain Spirit Realm telling a gatekeeper he needs to speak with Thunder Lord.

Ling Xi and Yun Feng watch Qing Yao treat Immortal Peng by breaking his legs. Yun Feng says he has insomnia, but he changes his mind about seeking treatment and leaves quickly.

Jing Xiu waits for a long time, so Ling Xi tells him the gatekeeper probably lied about informing Thunder Lord. Unexpectedly, Ling Xi sees Thunder Lord walking toward them. In her haste to escape, Ling Xi drops the longevity knot. Jing Xiu picks it up and keeps it.