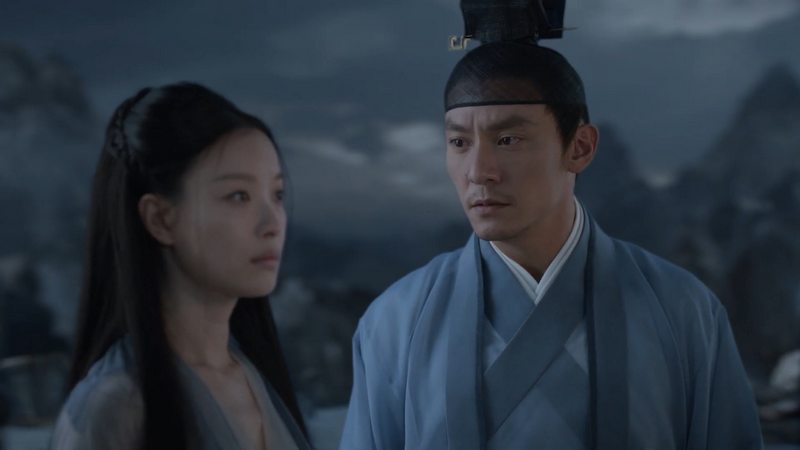 The guard inside Suoyao Tower is a beast called Huo Dou. Huo Dou says Jiu Chen can hand Ling Xi over to him. Jiu Chen ignores Huo Dou and takes Ling Xi to the highest place in the tower.

Ling Xi wants Jiu Chen to know she won’t hurt anyone, even though she has demonic energy and can free the Demon King. Jiu Chen transfers his power into the longevity knot and tells Ling Xi to hold onto it. He creates a mystical barrier around her, and as long as she stays in it, the longevity knot will protect her.

Suoyao Tower has the Shennong Cauldron, which suppresses the power of beasts and demons, making it impossible for them to escape.

After Jiu Chen walks out, a soldier closes the entrance of Suoyao Tower.

Huo Dou asks Ling Xi about her relationship with Jiu Chen. He is deaf, so he relies on a demon called Chang You to let him know what is said. Chang You lies, telling Huo Dou that Ling Xi wants to kill him. Thus, Huo Dou attacks Ling Xi in anger. Ling Xi holds up the longevity knot, and it protects her.

The Heavenly Emperor has something to tell Jiu Chen.

Jiu Chen allows Wuwan to return to its monstrous size. Wuwan charges and gets rid of the soldiers at Suoyao Tower.

Jiu Chen shrinks Wuwan back to its small size and tells it to go home.

Ling Xi continues to ignore Huo Dou. Huo Dou wants to take the longevity knot from Ling Xi, but he can’t go near her.

As soon as Jiu Chen steps inside Suoyao Tower, he sees the Shennong Cauldron.

Ling Xi hears the beasts and demons calling Jiu Chen’s name, but she can’t see him because she is too high up.

Jiu Chen thinks about what Si Ming said regarding the three items that can replace the Shennong Cauldron.

Coincidentally, Jiu Chen has the Nuwa Stone. When Jiu Chen was young, he was heavily injured after his clan, including his parents, died fighting the Demon Tribe. As a result, the Heavenly Emperor and Jiu Chen’s teacher replaced Jiu Chen’s heart with the Nuwa Stone to save him.

Jiu Chen attempts to take the Shennong Cauldron and inadvertently releases a dragon trapped inside. The dragon attacks Jiu Chen, intending to kill him. Although injured, Jiu Chen manages to destroy it.

Jiu Chen steals the Shennong Cauldron and extracts the Nuwa Stone from his chest.

Fending off Huo Dou’s attack, Jiu Chen disguises the Nuwa Stone to make it look like the Shennong Cauldron and uses it to replace the cauldron. The Nuwa Stone will prevent the beasts and demons in Suoyao Tower from escaping, and Jiu Chen knows he will slowly die without the Nuwa Stone.

Hiding what he did from Ling Xi, Jiu Chen tells her to trust him no matter what happens. Jiu Chen is cold to the touch, so Ling Xi thinks he is sick again and reminds him to take care of his health.

Before leaving, Jiu Chen glares at Huo Dou to warn him not to say anything about what he saw.

Unable to detect Jiu Chen’s heartbeat, Yun Feng guesses something must have happened to the Nuwa Stone and threatens to tell their teacher. Jiu Chen has to tell Yun Feng the truth, so he shows Yun Feng the Shennong Cauldron.