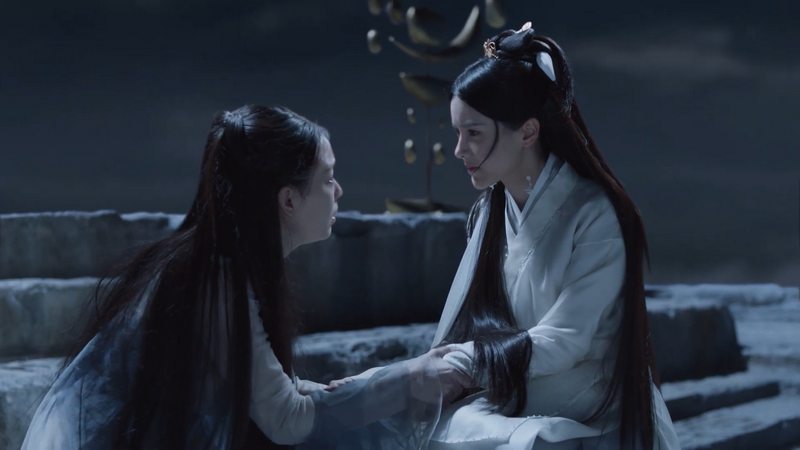 Qing Yao uses an herbal concoction and puts the guards at Ziyun Platform to sleep. Ling Xi doesn’t want to run away because she doesn’t want to get her father and Qing Yao in trouble. Moreover, Ling Xi thinks Jiu Chen will save her. Qing Yao puts Ling Xi to sleep and takes her away.

Carrying a magical pouch with Ling Xi inside, Qing Yao meets up with Ling Xi’s father and Cheng Yan. They separate as soldiers from the Heaven Realm chase after them.

Jiu Chen’s teacher tries to change Jiu Chen’s mind, reminding him to do what is necessary to save the six realms. However, Jiu Chen remains stubborn, believing there must be a way to save Ling Xi.

Escaping from the magical pouch, Ling Xi wants to go look for Qing Yao and Cheng Yan, but her father won’t let her. If caught, Qing Yao will be imprisoned, but Ling Xi will be killed. Unable to return home, Ling Xi’s father plans to create another Peach Forest somewhere else.

Breaking out of the stone enclosure, Jiu Chen tells his teacher he wants to save Ling Xi, even if it means going against fate. Jiu Chen apologizes for not following the path his teacher has shown him.

Qin Yuan, Hei Chi and a group of demons also want to capture Ling Xi. As a result, they have to fight Zi Guang and his group. From a distance, Jing Xiu watches and secretly helps Ling Xi when Hei Chi attacks her. Ling Xi and her father escape amid the chaos.

Jiu Chen deals with Zhong Hao so Ling Xi and her father can run away.

Severely injured, Ling Xi’s father tells Ling Xi to leave without him. He already prepared a place similar to Peach Forest, so she can hide there. No matter what, she mustn’t risk her life to avenge his death. Lastly, he tells her about her identity, including finding her at Mount Youdu and adopting her.

Yuan Tong tells Ling Xi that Qing Yao killed the guards at Ziyun Platform, but Ling Xi doesn’t believe her. Yuan Tong kills Ling Xi’s father. Ling Xi is furious, and her true form as a phoenix manifests itself for the first time, giving her the power to blast away Yuan Tong. Seeing this, Jing Xiu finds out Ling Xi is a phoenix similar to Ling Yue.

Ling Xi hears the Demon King calling her. She doesn’t want to obey him, but the Demon King exerts control over her mind through the mark behind her ear.

As soon as Jiu Chen defeats Zhong Hao, he turns his attention to searching for Ling Xi.

The Demon King succeeds in making Ling Xi come to him. Jiu Chen saves Ling Xi before the Demon King can kill her. Ling Xi says she has never harmed anyone, but the Heaven Tribe accuses her of being demonic and killed her father. Jiu Chen tells Ling Xi he will protect her.