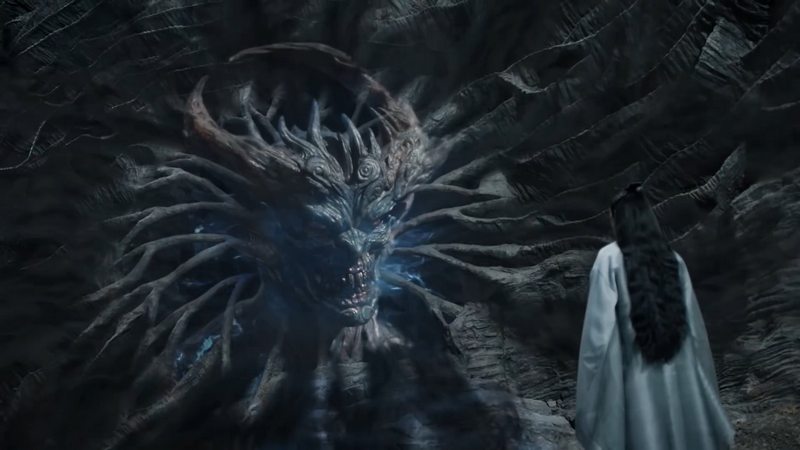 The Demon King says Jiu Chen finally has an obsession – Ling Xi. If Jiu Chen releases him, the Demon King won’t need Ling Xi, and she can be with Jiu Chen. Jiu Chen rejects the offer because his duty is to protect the six realms.

Ling Xi thinks Qin Yuan kidnapped her because he wants to take back the Shuiyue Cauldron. She fights Qin Yuan to get away from him.

The Heavenly Emperor wants to interrogate Ling Xi, suspecting she is from the Demon Tribe. Therefore, Yuan Tong, Thunder Lord, Immortal Lord Puhua and Immortal Lord Baishan go to Mount Youdu to capture Ling Xi. They ask Jiu Chen where Ling Xi is at, but Jiu Chen won’t even talk to them.

Jiu Chen finds Ling Xi and Qin Yuan fighting each other, resulting in Qin Yuan forcing her to fall off a cliff. Knocking Qin Yuan out with a wave of his hand, Jiu Chen flies down toward Ling Xi and saves her.

When Ling Xi wakes up, she finds herself at Peach Forest. She thinks what happened must be a dream.

Ling Xi isn’t at Peach Forest but in the Heaven Realm. An object hovers above her head to expose demonic energy inside her.

Trapped in an illusion of being back at Peach Forest, Ling Xi doesn’t understand why the Demon Tribe is after her. Cheng Yan yells at her, blaming her for causing her father’s death. Hei Chi kills Cheng Yan.

Jiu Chen secretly activates the longevity knot to help Ling Xi hide her demonic energy, but it doesn’t work. Ling Xi snaps out of her illusion, and the demonic energy inside her is exposed. Devastated, she looks at Jiu Chen and begs him to trust her. Thunder Lord orders Ling Xi to be locked up.

Yun Feng and Shi San try to talk to Jiu Chen about Ling Xi, but Jiu Chen stays silent, returning to his residence and shutting himself in his room.

Thinking about how he failed to protect Ling Xi, Jiu Chen spits out blood.

Jiu Chen begs the Heavenly Emperor to imprison Ling Xi at Congji Abyss. To prevent the Demon Tribe from getting to her, Jiu Chen volunteers to guard her forever. Jiu Chen gives up the God of War’s seal and resigns to demonstrate his willingness to stay at Congji Abyss.

A bell rings throughout the Heaven Realm, signaling the end of the cultivation period of Jiu Chen’s teacher.

Jiu Chen and Yun Feng hurry to Mount Tianzun and eagerly wait for their teacher. However, their teacher doesn’t come out of seclusion and wants to talk to Jiu Chen in private.