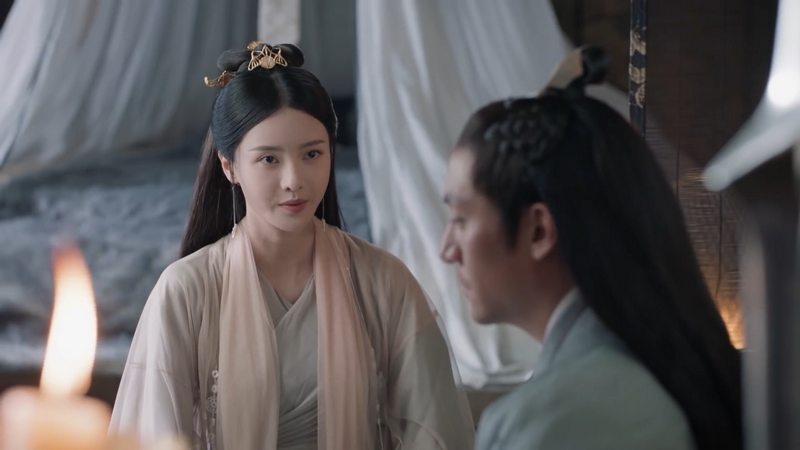 Qing Yao treats Jiu Chen and helps him recover from his cold illness. She warns him to be careful when using his power, and she thanks him for helping Ling Xi.

Ling Xi tells Qing Yao to visit her more often. It’ll be hard for them to see each other when Ling Xi is at Congji Abyss.

Yun Feng stares at Ling Xi, feeling she is different somehow, but he can’t pinpoint what the problem is. Qing Yao quickly leaves, taking Ling Xi with her.

Cheng Yan asks Ling Xi what is going on between her and Jiu Chen, finding it hard to believe Jiu Chen could like someone like her. Ling Xi knows her deficiencies. Then again, no female is worthy of Jiu Chen anyway, so why not her?

It’s Mid-Autumn Festival. Jiu Chen doesn’t need to eat, but he still eats the hard mooncakes Ling Xi made to make her happy. Ling Xi says her loved ones would kiss her forehead and wish her something auspicious on this day. Jiu Chen kisses her forehead, wishing her to be safe and happy.

Ling Xi wonders if Jiu Chen has fallen for her.

The investigation into what happened at Mount Kunlun is done, so Jiu Chen has to go see the Heavenly Emperor. Before leaving, Jiu Chen tells Ling Xi not to worry. Everything will be fine, and they will return to Congji Abyss.

After investigating, Immortal Lord Puhua discovers Hei Chi killed the soldiers at Mount Kunlun. Ling Xi is innocent, so she can leave the Heaven Realm.

Jiu Chen asks Shi San if she has seen Ling Xi, and Shi San says she hasn’t seen her.

Jiu Chen asks a guard at the Southern Gate about outsiders entering the Heaven Realm. The guard says there was only Qin Yuan.

Jiu Chen and Shi San arrive at Mount Youdu to look for Ling Xi. He tells Shi San to guard the perimeter and not let anyone go into the mountain.