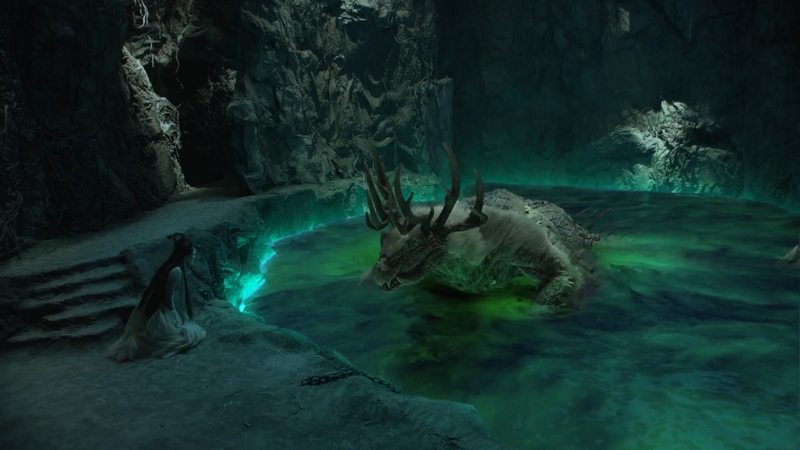 Jiu Chen and Kai Yang arrive at Mount Kunlun. The Queen Mother of the West is happy Jiu Chen is attending her banquet.

Zhong Hao and Hei Chi find Tuntian Beast. Ling Xi tries to stop them from killing it. Zhong Hao orders Hei Chi to get rid of Ling Xi. Tuntian Beast throws Ling Xi onto its back and breaking the chains, it flies away.

After they escape, Ling Xi tells Tuntian Beast to land on the ground. Zhong Hao catches up to them. Tuntian Beast sacrifices itself to save Ling Xi. The Demon King’s blade is repaired when it’s coated with Tuntian Beast’s blood. Ling Xi loses control, and her necklace’s pendant alerts her father at Peach Forest.

The demonic energy inside Ling Xi overwhelms her, and Zhong Hao recognizes her as the baby at the final battle at Mount Youdu. Jiu Chen arrives in time to save Ling Xi. Zhong Hao wounds Jiu Chen in a sneak attack and flees since he can’t defeat Jiu Chen.

At Congji Abyss, Jiu Chen uses his power to suppress the demonic energy inside Ling Xi.

While Ling Xi is unconscious, Jiu Chen confiscates her necklace. Ling Xi’s father won’t be alerted again and have to worry about her.

As soon as Ling Xi wakes up, she looks for Jiu Chen. She hugs him and finds his shoulder bloody from an injury.

Ling Xi tries to treat Jiu Chen’s injury, but it won’t heal. Jiu Chen says the injury is caused by the Demon King’s blade, so it will only heal slowly through cultivation.

Ling Xi blames herself because Tuntian Beast sacrificed itself to save her. Jiu Chen says Tuntian Beast was the Demon King’s steed and has killed many. Thus, it was fated to die. Jiu Chen allows Ling Xi to stay at Congji Abyss, but she won’t have her family, her friends, etc. There is only him. Ling Xi happily agrees.

Jiu Chen returns to the Heaven Realm with bad news for the Heavenly Emperor. The Demon King’s blade has appeared again.

Yun Feng praises Jiu Chen for deftly shifting everyone’s attention from Ling Xi to the Demon King’s blade. Although Yun Feng and Ling Xi are friends, he will intervene if she causes Jiu Chen to turn against the six realms. Jiu Chen says that is impossible.

Jiu Chen tells Yun Feng that Zhong Hao’s target is Ling Xi. Yun Feng promises to behave so that their plan at Mount Youdu is successful.

Kai Yang doesn’t know what to do with Wuwan. Jiu Chen says he will take care of it.

Wuwan licks Ling Xi’s hand, waking her up. Ling Xi can’t find Jiu Chen, so she runs outside, but he has left already. Yuan Tong has followed Jiu Chen to Congji Abyss and sees Ling Xi.