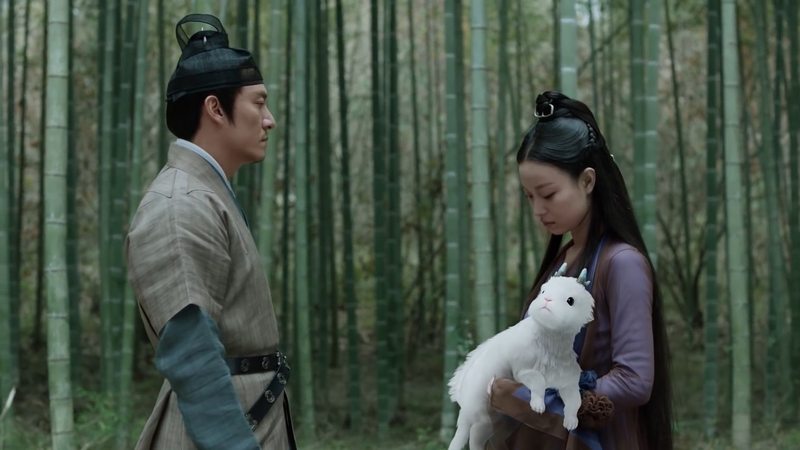 Jiu Chen wants to lock Baize Beast in Suoyao Tower, a prison for demons and beasts. Baize Beast reminds Ling Xi of her dog, so she persuades Jiu Chen to let her keep it as a pet.

Ling Yue welcomes Jiu Chen to the Mountain Spirit Realm, thanking him for sending Yun Feng to warn her about Zhong Hao. To her surprise, Ling Yue discovers Ling Xi is around the same age as her lost daughter.

On behalf of Ling Yue, Ling Yue’s maid asks Ling Xi about her background. Ling Xi says she was raised by her father, and she has siblings. Ling Yue is disappointed because it doesn’t seem like Ling Xi could be her lost daughter.

Aiming for a name that is cute and easy to say, Ling Xi calls her pet “Wuwan,” meaning “five bowls” because it always eats at least five bowls of food. Jiu Chen allows Ling Xi to accompany him to a banquet, but she has to stay close to him.

A maid tells Ling Xi to try searching in the garden.

In the garden, Bao Qing hits Wuwan for biting her and orders soldiers to capture it. Ling Xi attacks them so Wuwan can escape.

Chased by soldiers, Ling Xi hides at Jing Xiu’s place. Tied up by vines, she begs Jing Xiu to help her but won’t tell him who she is.

Ling Xi uses her bracelet to escape the vines. As she is leaving, she sees Jiu Chen’s longevity knot in the room.

The next day, Jiu Chen and Ling Xi travel into Mount Youdu to where the Demon King is sealed. No one can come to this area except Jiu Chen because the demonic energy is too strong, but Ling Xi isn’t affected by it.

Jiu Chen and Ling Xi arrive at Congji Abyss where he has another residence. Ling Xi points to the beautiful lights in the night sky. Jiu Chen looks at her, not saying anything.

Seeing Jiu Chen, his housekeeper cries in happiness. Ling Xi follows Jiu Chen into the residence, but Wuwan doesn’t want to go with them.

The housekeeper leads Jiu Chen, Ling Xi and Wuwan to an ice chamber. Jiu Chen tells Ling Xi to stay there by herself. The housekeeper closes the door, locking Ling Xi inside.

Ling Xi turns into a bird and flies around, but she can’t find an exit. Is Jiu Chen testing her ability? Ling Xi cultivates to stay warm, but eventually, she gives up because it’s too cold. She regrets not giving the longevity knot back to Jiu Chen.

Wuwan runs around in front of Jiu Chen as if begging him to release Ling Xi. Jiu Chen ignores it.

Ling Xi slowly freezes to death. Meanwhile, Jiu Chen remembers Ling Xi’s faith in his goodness and how she repeatedly risked her life to save him.

[Flashback: After sealing the Demon King, Jiu Chen is fatally wounded. He hears a baby crying and discovers Ling Xi with a longevity knot in her blanket. The Demon King infects Ling Xi with demonic energy, so Jiu Chen uses his energy to save her.]

Ling Xi thinks she did something wrong, so Jiu Chen wants to punish her. Nevertheless, she is confident he won’t harm her. Scared to be alone, Ling Xi begs Jiu Chen to stay with her. Jiu Chen sits at the foot of her bed, deep in thought.