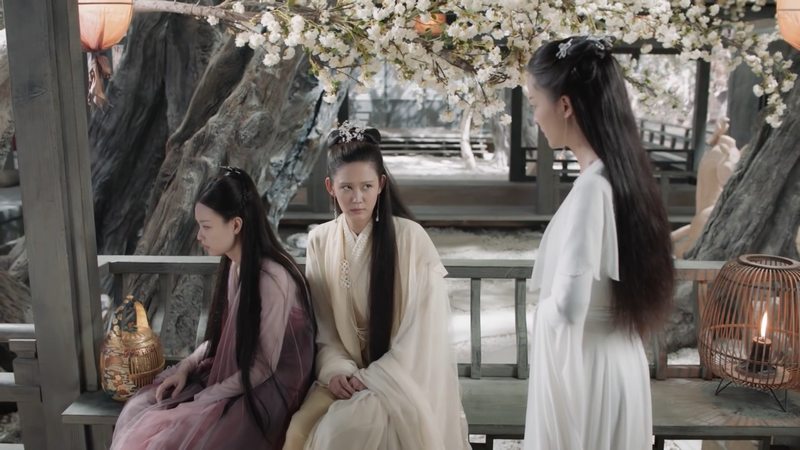 Shi San wants to take revenge for Ling Xi. However, she changes her mind when Hua Yan says the culprit is Yu Li’s bird. Shi San isn’t scared of Yu Li, but she doesn’t want to offend Medicine King because he controls the distribution of pills.

Ling Xi fails to bait Yu Li’s bird with food, so she turns into a bird and chases it.

Qin Yuan is in the Heaven Realm. He sees Ling Xi flying around and remembers seeing a similar bird at Immortal Elder Nanji’s place.

Yu Li drags Ling Xi in front of Jiu Chen and asks him to punish Ling Xi. As soon as Ling Xi sees Qin Yuan, she covers her wrist to hide her bracelet. Shi San argues with Yu Li, so Jiu Chen orders them to be quiet. He tells Ling Xi to return to her room and think about what she did, giving her a chance to escape.

Once again, Qin Yuan asks Jiu Chen about the Shuiyue Cauldron. Jiu Chen continues to act like he doesn’t know anything. Yu Li scolds Qin Yuan for being disrespectful. Given Jiu Chen’s status, there is no need for Jiu Chen to covet anything from Immortal Elder Nanji.

After Qin Yuan leaves, Yu Li tells Jiu Chen she has admired him for a long time. Moreover, she never believed the rumors about him and wishes she could be his maid like Ling Xi. Jiu Chen says he is tired, politely ending their conversation.

Yu Li warns Ling Xi to stay away from her bird.

Ling Xi worries she has to give up the Shuiyue Cauldron to Qin Yuan. Jiu Chen tells her to stop causing trouble.

Jiu Chen has a task for Shi San.

Shi San tells Jiu Chen she followed Qin Yuan, but she lost track of him near Mount Youdu. Jiu Chen realizes he needs to go to Mount Youdu to investigate because he can’t depend on Shi San to do it.

Ling Xi attempts to find out what is going on, so she brings Jiu Chen tea. Jiu Chen tells Ling Xi to stay in her room and stop running around, causing trouble.

Since Jiu Chen appears serious, Ling Xi thinks Shi San did something to annoy him. Shi San says she knows Jiu Chen best, so she can’t possibly annoy him and not know it.

Yun Feng agrees with Jiu Chen. Zhong Hao is up to something. Jiu Chen wants to take Ling Xi to Mount Youdu to test her connection to the Demon King. In addition, Jiu Chen tells Yun Feng to warn Ling Yue so that she will alert them if she discovers traitors working for the Demon King in her realm.

Sitting at the Wangyue Stream, Ling Xi sees Jiu Chen’s reflection in the water. She assumes it’s an illusion until the image speaks, startling her. Jiu Chen tells her to accompany him to the Mortal Realm. Ling Xi looks forward to the delicious food she can eat.

Jiu Chen and Ling Xi travel together on a cloud. She asks him where they are going in the Mortal Realm, but there is no answer. Jiu Chen has disappeared.

Baize Beast terrorizes a village as it searches for food. Jiu Chen can subdue the beast. Nevertheless, Ling Xi tries to help by using buns to lure it away from crowded streets.

Ling Xi panics when Baize Beast chases after her, thinking it wants to eat her. Jiu Chen shrinks the beast into a small animal.