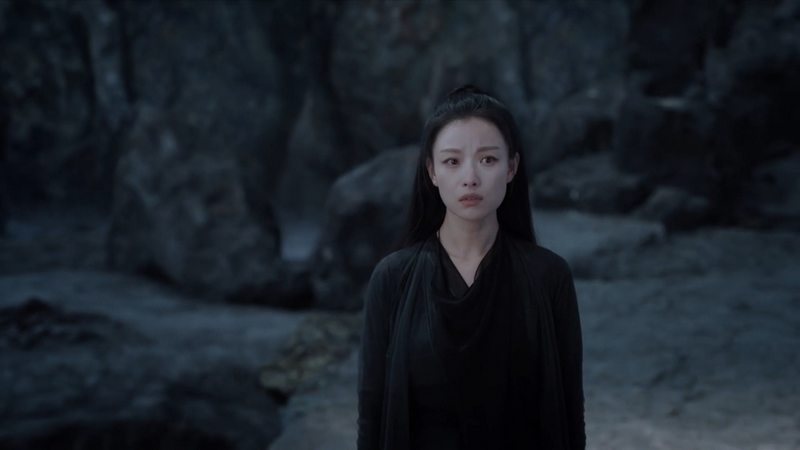 Inside the cave, there is a basin with water in it. Ling Xi touches the water. Four columns of water shoot upward, condensing into panels showing what will happen to Ling Xi in the future. The panels disappear, and the Shuiyue Cauldron appears in the basin.

Ling Xi puts the ashes of Zhu Xie’s burned war report into the Shuiyue Cauldron. Once restored, the war report shows Yuan Zheng turning demonic in the final battle at Mount Youdu, so Jiu Chen had to kill him. The Shuiyue Cauldron turns into a bracelet on Ling Xi’s wrist, and Ling Xi can’t take it off.

Ling Xi flies back to the Heaven Realm.

Ling Xi tells Jiu Chen about her dog’s death. She asks Jiu Chen if he suffers when he is blamed for something he didn’t do. It’s unfair since Jiu Chen always lives for others, sacrificing himself for the greater good and defending the weak. Jiu Chen doesn’t mind because taking the blame won’t kill him.

Ling Xi looks at Yuan Zheng’s memorial tablet, resenting what he did but vowing to keep his secret. Yuan Tong appears before Ling Xi could burn Zhu Xie’s war report.

Falling into a bottomless spiral, lightning strikes Ling Xi from all directions, and she loses consciousness. At this time, Ling Xi’s bracelet activates, saving her.

Walking around, Qing Yao sees a feather that appears to come from Ling Xi. Tracing a trail of feathers, Qing Yao finds Ling Xi by Xixian Pond. Ling Xi is severely injured, so she is in her true form as a bird. Right next to Ling Xi is Zhu Xie’s war report.

Qing Yao arrives at Gongde Hall with Ling Xi. Jiu Chen treats Ling Xi’s injury so that she can turn back into human form. Qing Yao reveals Zhu Xie’s war report, letting everyone see what happened in the final battle at Mount Youdu.