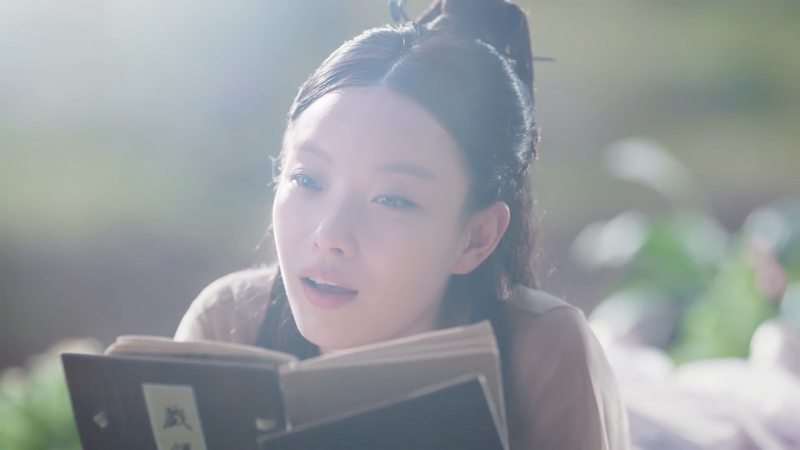 Searching for her father, Ling Xi finds him passed out from drinking too much.

Ling Xi asks her father why she keeps dreaming about the final battle at Mount Youdu in which the God of War sealed the Demon King, but what happened in her dream is different from what she read. Her father, drunk like always, ignores her.

Ling Xi’s father tells Ling Xi to take medicine to Cheng Yan so that Cheng Yan can deliver it to an immortal in the Heaven Realm.

For as long as Ling Xi can remember, her father forbids her from leaving Peach Forest.

Ling Xi can’t find Cheng Yan, so she decides to deliver the medicine herself.

Transforming into a bird, her true form, Ling Xi sneaks out of Peach Forest.

At the Southern Gate in the Heaven Realm, the gatekeepers won’t let Ling Xi enter because she doesn’t have an invitation. Ling Xi leans on a tree and is surprised to see it disintegrate at the touch of her hand.

While the gatekeepers investigate what happened to the tree, Ling Xi sneaks inside.

Wandering around, Ling Xi meets Si Ming, Immortal Peng and Yun Feng. They point out Thunder Lord, the likeliest candidate to be the next God of War, to her. Ling Xi isn’t impressed by her idol’s replacement.

Seeing the gatekeepers searching for her, Ling Xi quickly leaves the Heaven Realm. Nevertheless, the gatekeepers chase and attack her, causing her to fall into the Changsheng Sea.

Deep under the Changsheng Sea, Ling Xi hides in a forbidden area that’s off-limits to the Heaven Tribe. The gatekeepers don’t dare to follow her and leave.

Ling Xi sees a frozen immortal and causes him to wake up from a deep sleep, not realizing he is her idol – Jiu Chen, the God of War. Before Jiu Chen thaws completely, Ling Xi runs away, taking the longevity knot in his hand.

When Jiu Chen can move, he summons his sword.

Far away, the sword flies to the Changsheng Sea and lands in Jiu Chen’s hand.

Tuntian Beast, sealed near the Southern Gate in the Heaven Realm, escapes and follows Ling Xi. Thunder Lord and a group of soldiers chase them, intending to capture the beast.

The Heavenly Emperor is glad to see Jiu Chen again. The Heaven Tribe thought Jiu Chen had died after sealing the Demon King.

The Heavenly Emperor asks if Ling Xi trespassed into the forbidden area of the Changsheng Sea and saw Jiu Chen, which is a crime punishable by death. Ling Xi says she didn’t do that. Jiu Chen lies for her, saying he has never seen her.

Needing someone to care for him while he recovers, Jiu Chen asks Ling Xi to be his maid because she is a physician’s daughter and knows medicine. Despite her father’s objection, Ling Xi agrees.