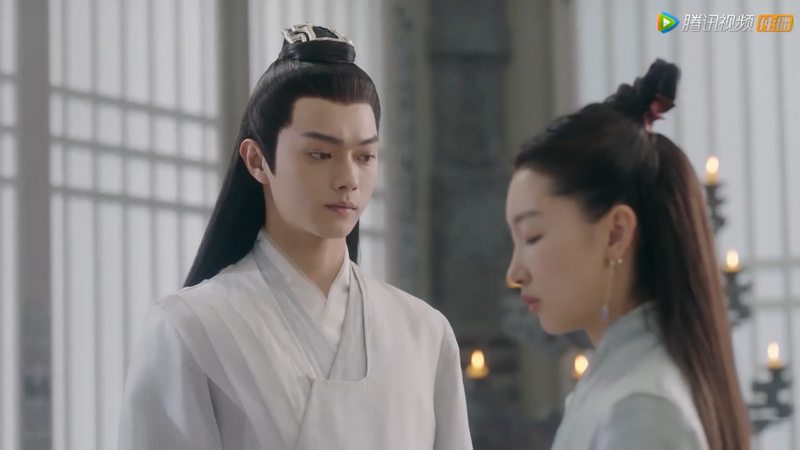 Tianqi yells at Baijue for not apologizing to him, the victim, but to Shanggu. To help Gujun become a god, Baijue will let him borrow the Dark Abyss and made a pill to unblock his cold veins. Shanggu asks what happens if Gujun wins, but Baijue’s silence disappoints her.

Shanggu loves Tianqi, but not romantically because he is like her brother. Tianqi intends to keep loving Shanggu and stay by her side, unfazed by her rejection.

Baijue tells Xueying to leave the God Realm after fighting Gujun or he will reveal her crime.

Tianqi wants to talk to Baijue about Shanggu.

Shanggu is worried, not knowing why Baijue hasn’t shown up for their meeting. Gujun doesn’t mind if Baijue won’t let them borrow the Dark Abyss.

Unlike Baijue, Tianqi dared to tell Shanggu how he feels about her. Baijue says love isn’t important to Shanggu, whose destiny is to be Chief God.

Baijue won’t force Shanggu to go to the Nether World if Gujun wins. Smiling with happiness, Shanggu accepts the key of the Dark Abyss. Xueying is determined to defeat Gujun.

In the Dark Abyss, a thunderstorm forms for Gujun’s trial.

Baijue monitors what is happening in the Dark Abyss.

Hongri is alarmed. However, Baijue doesn’t intervene because he believes in Shanggu.

Baijue becomes a god and thanks Shanggu. Not expecting thunder strikes in trials to be so devastating, Shanggu thinks about Baijue, who took all 49 thunder strikes for her in her trial.

Baijue is proud of Shanggu.

Zhiyang is busy in a meeting. Shanggu finds out the Power of Chaos is dissipating, causing an imbalance in the distribution of power in the realms.

Shanggu puts away her dice, toys and romance stories.

Xueying cheats by using spells, but Gujun defeats her. Zhongli and Xiahui confess, blaming Xueying for manipulating them into stealing a Nine-Clawed Lotus from Baijue’s pond and framing Gujun. Baijue banishes Xueying from the God Realm and demotes her to guard the barrier of the Nether World. Shanggu announces her decision to go to the Nether World.

As soon as Shanggu enters the Nether World, she has to fight devils. Moyu signals to his followers to refrain from attacking Shanggu.

Shanggu asks Xuanyi to create another barrier covering the Nether World, preventing her from leaving until she obtains the Power of Chaos. Xuanyi agrees on two conditions: his devils won’t go easy on her and she visits him often.

Baijue’s spirit leaves his body to go into the Nether World, even though doing so decreases his cultivation and lifespan. Hongri begs Baijue to be careful because whatever happens to the spirit affects the body, including death.

Baijue’s spirit guards Shanggu as she trains in the Nether World.